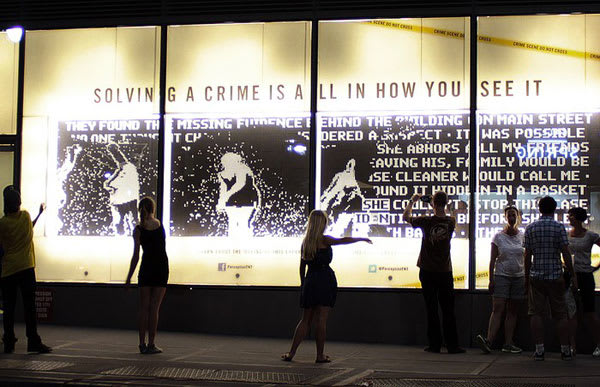 TNT wanted to launch its new crime show Perception, in style, and we have to give it to 'em, this is pretty cool. Working with professional technological tinkerers, Breakfast, they created a 23 x 12 foot display made up of 44,000 electromagnetic dots. Imagine those ticker boards you see at train stations, jazzed up with a little modern flavor. The dots are white on one side, black on the other, and move at 15 times the speed of their typical rail-station counterparts -- giving a real-time effect. The installation is set up in Manhattan's Herald Square until July 29th, and is fully interactive. When pedestrians walk past, the board updates to reflect their movement, and this "silhouette" interacts with words and images on the screen. Extra sensory stimulation also comes from the noise the board makes, literally letting you hear your movements. If a picture paints a thousand words, then 44,000 dots in a video paints even more. Head past the break to see the beast in action, plus more details on how it was done.

For the month of July, TNT with the help of BREAKFAST is presenting a first-of-a-kind experience on the streets of New York.

Located in Manhattan's Herald Square at 885 6th Ave and 32nd Street, the 23x12 foot display is made up of 44,000 electromagnetic spinning dots which each flip from black to white creating an incredibly unique moving image that you can actually hear. Through their body movement, pedestrians can literally erase words from the screen – leaving specific clues. These clues then animate to diagnose the human condition at the root of a crime taken directly from TNT's "Perception". This animation recreates the unique ability of Perception's lead character, Dr. Daniel Pierce, who is able to see hidden messages to help him solve crimes.

Building off of a technology from the past, similar to the audible flip-boards that once graced the walls of train-stations, the team at BREAKFAST re-engineered these components from the ground up, enabling them to operate in real-time and 15 times faster than originally designed. Users are not only able to see a unique black-and-white reflection of their movements, but hear what that sounds like as the thousands of analog dots spin rapidly back and forth.


The experience will run 24 hours a day until July 29th.

Source: Breakfast NY
In this article: breakfast, breakfast ny, BreakfastNy, digital ticker, DigitalTicker, display, dot matrix, DotMatrix, interactive, interactive display, interactive dot matrix screen, InteractiveDisplay, InteractiveDotMatrixScreen, manhattan, perception, promo, promotional tool, PromotionalTool, ticker board, TickerBoard, TNT, video
All products recommended by Engadget are selected by our editorial team, independent of our parent company. Some of our stories include affiliate links. If you buy something through one of these links, we may earn an affiliate commission.