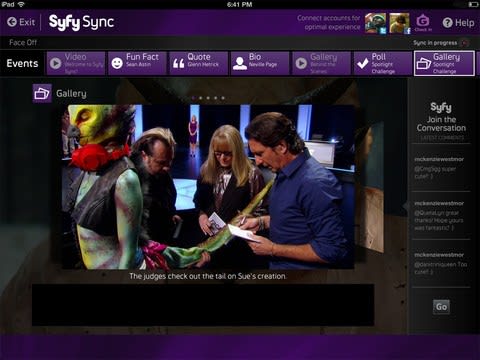 We're still not sure about the Sci Fi / Syfy Network name switch, but whatever you call it the network is the latest to jump on the trend of second screen features. Currently available on the latest version of its iPad app (and listed as "coming soon" for Android tablets on the official page an in the demo video embedded after the break), Syfy Sync will work with certain shows to pull up interactive content on your mobile device along with whatever is playing on TV. The first show to get the treatment is the season premiere of Face Off airing August 21st. Naturally, there's a social media element as well, with sharing to Facebook and Twitter, as well as integrated GetGlue check-ins. Whether or not you dig the second screen aspects or are just waiting for some better shows to come on, there are other upgrades with a new UI as, show related photo galleries and support for AirPlay to play the app's video clips on your TV. Syfy for iPad 2.0 with sync is available for free in iTunes, we'll let you know when the Android version is upgraded and if similar features head to any other mobile platforms soon.

Source: iTunes, Syfy Sync
Coverage: Syfy
In this article: airplay, android, app, apple, face off, FaceOff, getglue, hdpostcross, hdpostmini, ipad, minipost, second screen, SecondScreen, social media, SocialMedia, syfy, syfy network, SyfyNetwork, tablet, video
All products recommended by Engadget are selected by our editorial team, independent of our parent company. Some of our stories include affiliate links. If you buy something through one of these links, we may earn an affiliate commission.
Share
Tweet
Share