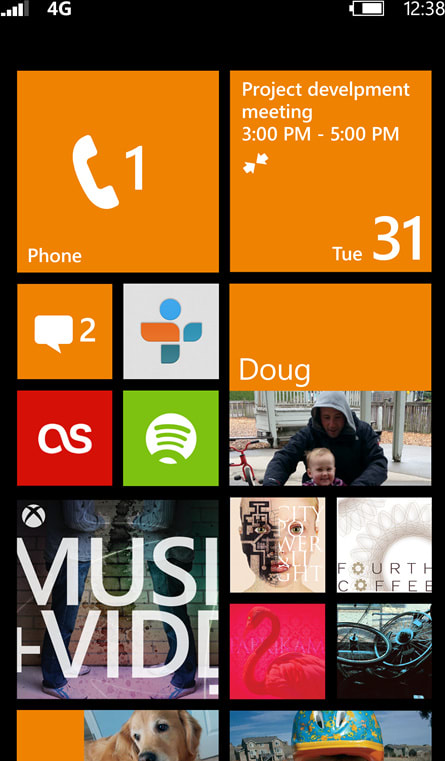 When it comes to what you can do after the shot is taken, Windows Phone 8 has a few new editing tools to add to its collection: crop and rotate. On top of that, SkyDrive users are given more flexibility in how compressed their photos are when they're uploaded -- pics are uploaded in "good quality" by default, but you can change the settings so your shots will be pushed to the cloud in full res ("best quality") as long as you're connected to a hotspot. You can also use NFC once again to your advantage by sharing your pictures and videos with others. As for the Photos Hub, the panels are all the same; the galleries, however, now come with a much-needed multi-select button so you can delete, share, save or star more than one at a time.

We already know the Zune brand is yesterday's news, but it seems as though Windows Phone is doing everything it possibly can to place itself as far away from the old brand as possible. We no longer have the music section of the Zune marketplace, it's the standalone Xbox Music Store; likewise, the Zune pass is now the Xbox Music Pass. Perhaps the best new feature is the phone's deep integration with the cloud. Purchases you make within the Music Store will automatically be stored there so that you can listen to these songs on all of your Microsoft-branded devices (i.e., Win 8, WP8 and Xbox 360). Every song or video associated with your Microsoft account will show up in your collection, and you can choose to stream them or download them so that you can listen later. Playlists receive the same treatment. There's also a Buzz Panel in the Xbox Music Store, provided you're in Artist View. This feature is supposed to let you stay up to date on the latest news connected to that artist by showing Twitter feeds, news feeds and images related to them. As of this writing, Microsoft has not enabled the feature; we've been told to expect it sometime soon after launch. If there's one thing that Microsoft can't deny, it's the fact that the gaming experience was lacking on Windows Phone 7, despite the company's efforts to market its Games Hub in connection with Xbox Live. Fortunately, the folks in Redmond seem to have realized that this needed to change in order for WP8 to gain more momentum -- when most of the top games are going straight to iOS and Android, Windows Phone has struggled to attract popular titles like Words with Friends until now. That's definitely a cause for concern. Of course, games don't a good OS make, but it's one of the factors that many people take into consideration when looking for a new smartphone. With that in mind, let's look at how Microsoft is addressing this issue. First, it hopes that its integration with Windows 8 and use of native code will attract more big-name console developers that weren't previously willing to drain unnecessary resources into something like this. Adding the extra support will theoretically entice devs because it should be easy to port Windows titles over to the mobile OS (and vice versa). Also, WP8 will finally give devs the power to offer in-game purchases (freemium, anyone?), increasing the opportunities for struggling third parties to make a few extra bucks.

There's one aspect of the Games Hub that has us completely puzzled. The spotlight panel features a large list of gaming options that Microsoft wants to promote, but tapping on the links take us into a link on IE10. From there you can click on another link that will take you into the Windows Phone Store, but we have a hard time understanding why we need to be routed into the browser. We'd rather be taken either directly into the Store or at least a page within the Hub that loads faster and shows your options in an efficient manner. Take the middleman out of it.

We've been talking about the Windows Phone Store quite a bit throughout this review, and until now, we haven't actually discussed that it is, in fact, the rebranded Windows Phone Marketplace. On the outside, nothing sticks out like a sore thumb; the renovations here are mostly of the behind-the-scenes sort. For starters, the revamped market is now powered by Bing Search, something that Microsoft says will bring you more relevant results and recommendations -- it now takes ratings into consideration when pulling up search results, as well as the rate of uninstalls and crashes. Additionally, the Store now offers in-app purchases and multiple methods for you to pay up. As we mentioned when discussing the Wallet app, you can choose from carrier billing, a credit / debit card, Microsoft gift card or PayPal. As a side note, any WP7.5 apps you purchased will still be available on WP8 -- without having to pay for it a second time.

Every major update to Windows Phone so far has included a bump up to the next version of Internet Explorer. So it is this time, as WP8 now houses Internet Explorer 10 (Mango had IE9). Again, you're not going to see many new UI elements here, as most of the improvements are taking place underneath -- this new iteration promises higher efficiency, faster rendering time, hardware-accelerated graphics and twice as much HTML5 support as IE9.

Does it work as promised? Running side by side against Mango-powered phones, it was clearly much faster. In particular, our Windows Phone 8X cruised through SunSpider in 904ms. That's the fastest time we've recorded on a mobile device, though not by much -- it barely beat out the iPhone 5's score of 914ms. (If you're into benchmarks, the 8X also got 326 in HTML5test and 56,047 in Browsermark.)

10
The address bar also can be customized a bit more than before, as you can now choose between three different functions for the main button found within: your options are stop / refresh, favorites and tabs. To add to the list of new features, IE10 now has "find on page," Do Not Track and NFC link sharing. IE10 also includes a SmartScreen filter, which is a lifesaver if you accidentally wander into a malicious site.

We'll admit that Enterprise isn't a huge area of coverage for us, and we typically refrain from going into excruciating detail in that area. One feature designed for the Enterprise, however, is actually too clever for us to simply shun. WP8 includes support for special private hubs that can only be accessed by employees or IT professionals. Known aptly as Company Hub, this is a place set aside for companies to offer news, calendars, notes and employee-specific apps that can't (and shouldn't) be accessible via the public Windows Phone Store. These types of apps have been available for iOS and Android for quite some time, but we enjoy the idea of each employee having a one-stop shop on their phone for all of their pertinent information, rather than having to sideload everything they need.

Any of our readers who have given Windows Phone a chance over the last two years likely have seen that Google and Microsoft haven't played well -- at least, not when it comes to the latter's mobile OS. A quick search of the Windows Phone Store, in fact, shows only one app developed by Google Inc. This means that you don't have any native apps for Gmail, Reader, Voice, Talk or the vast multitude of other services. Third-party apps are available to help cover this gaping hole, but most of them aren't up to par with the experience Android users have on their devices. Good luck getting privately shared calendars to show up -- our various methods didn't turn up a way to do it. (Our regular Google Calendar and publicly shared calendars worked just fine.) Heck, even the web view for its services (most of which look great on iOS) appear the same way you'd expect it to show up on your kid's prepaid featurephone: slow, unintuitive and frustrating. Lastly, we haven't even seen any efforts from either company to integrate Google+ or Talk into the OS like what was done for Twitter and Facebook. Indeed, Windows Phone -- despite its various improvements -- still lacks a punch in this area, which makes it a tough sell for Android fans to move over. Here are a few other notable observations concerning Windows Phone 8. With the exception of a few new features, Windows Phone hadn't changed much in the last two years. The new version of its OS, however, definitely makes the platform feel more refined and even brings back some of the freshness we originally felt when we first laid eyes on the firmware. We demanded support for hardware that's relevant to today's market, and Microsoft brought it; we wanted more app integration and customization, and it's now much improved over WP7. Indeed, Windows Phone 8 is precisely what we wanted to see come out of Redmond in the first place. There's only one major question mark still looming over its head now; how will developers respond to it? In 2012, an OS is only as strong as its ecosystem, and regardless of Microsoft's best efforts to sell the platform to big-name developers (and even amassing over 100,000 apps to date), it's been an ongoing struggle for Windows Phone to appear relevant enough to attract popular titles. What the new firmware has, however, is much more potential than WP7 ever had; Microsoft has finally laid the proper framework to make the platform desirable to developers. We'll also likely see a large number of Windows 8 customers eventually drawn to Microsoft's phone OS as they begin investing time and money in the desktop or tablet versions. Let there be no doubt -- Windows Phone 8 is a definite improvement over its predecessor, and it's long overdue. In general, we like what we see, and users and developers have been eagerly awaiting this update ever since the Windows Phone platform first launched. It's still far from perfect, but Microsoft has finally caught up in many ways to its competitors (and come up with some clever new features in the process), and by doing so, the momentum is now in its court. If Microsoft loses that momentum in the near future, however, we have a hard time seeing its OS recovering from it.

Windows Phone 8 is a tremendous improvement over its predecessor, but it remains to be seen if developers are ready to hop on to the platform.

How would you rate the Windows Phone 8?
We want to hear what you think. Post a quick review now to join the conversation!
Write a review

8.1
In this article: microsoft, mobile operating system, Mobile OS, MobileOperatingSystem, MobileOs, mobilepostcross, OS, review, video, windows phone, windows phone 8, WindowsPhone, WindowsPhone8, wp8
All products recommended by Engadget are selected by our editorial team, independent of our parent company. Some of our stories include affiliate links. If you buy something through one of these links, we may earn an affiliate commission.