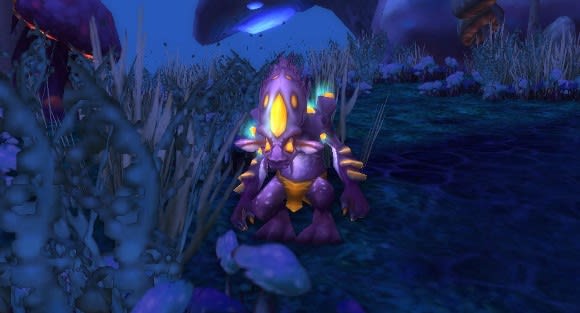 If you haven't purchased the Pandaren Monk pet off of the Blizzard store (or don't have access to the numerous limited edition murlocs and holiday pets), it can be a challenge finding a good humanoid pet to use in pet battles, especially early on in your battling career. The first one you'll gain access to is the recently implemented Harpy Youngling from the Northern Barrens, but it isn't very good as a humanoid pet as it has primarily flying-type moves. You can acquire the Stunted Yeti as early as level 12 in Feralas, but in my humble opinion, the first humanoid wild pet worth its weight is Zangarmarsh's Sporeling Sprout, acquired around pet level 18.

The Sporeling Sprout, which spawns in Zangarmarsh near Sporeggar, possesses a moveset that deals a mix of humanoid, undead, and elemental damage, all depending on which abilities you decide to use. Its attacks are as follows:
With this mix of abilities, you can spec your sporeling either offensively or defensively. Creeping Fungus and Spore Shrooms used in tandem will cause your enemies to bleed out slowly via damage over time. The combination of Leech Seed and Crouch will give your sporeling the ability to outlast your opponent. Both tactics work well with the humanoid passive ability which allows your pet to regenerate 4% of his max health every round he attacks. The Sporeling Sprout plays the long game, and he's well-equipped to accomplish it.

The real challenge when choosing your sporeling's attacks is deciding what to use in slot 1. Slot 1 is where you'll get your move that deals actual humanoid damage, which is the entire point of picking up this pet to begin with. Jab does more damage than Charge overall, but Charge guarantees that you will always attack first when you're using it.

Personally, I find it absolutely infuriating when my enemy has an ability like Charge. There are many attacks in pet battles that do bonus damage based on whether you attack first or second, so being aware of your speed in comparison to your enemy's speed is part of good play. If you expect to go first, but your opponent uses Charge, it can gut your damage. Having Charge in your toolkit can be quite a boon.

On the other hand, if you're intending to use your Sporeling Sprout as a dragonkiller, you may want to avoid Charge altogether. Many dragonkin have access to Tail Sweep, which does extra damage if the user attacks last. If you use Charge against enemies with that ability, you're enabling them to deal more damage to you. That's quite the gamble.

If you're willing to risk Tail Sweeps to utilize Charge, try to catch a Sporeling Sprout that's heavy on Health or Power, but low on Speed. If you can use Charge to attack first whenever you please, Speed stops being an important stat at all and allows you to pile on damage or HP. Note again that the humanoid passive ability works well here -- every turn you attack, you regenerate 4% of your maximum health. A healthy-heavy sporeling would gain greater benefit.

If you're planning on catching this little guy, don't forget to take your Terrible Turnip with you! Accidentally killing a rare-quality, health-heavy Sporeling Sprout would be heartbreaking.
In this article: charge, creeping-fungus, crouch, jab, leech-seed, pet-battle-strategies, pet-battle-tactics, pet-battles, spore-shrooms, sporeggar, sporeling-sprout, zangarmarsh
All products recommended by Engadget are selected by our editorial team, independent of our parent company. Some of our stories include affiliate links. If you buy something through one of these links, we may earn an affiliate commission.