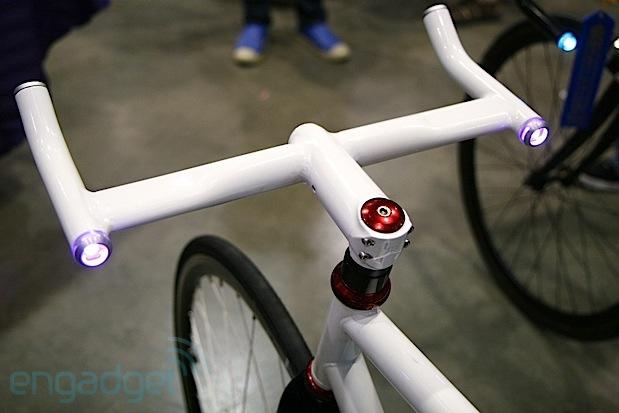 Technologically bent cyclists have their choice of advanced bicycles these days, but it's a little hard to justify getting a specialized vehicle if your existing two-wheeler still functions just fine. However, swap your bike's handlebars with one of these handsome aluminum ones from Helios and all of a sudden your beloved ride is equipped with a 500-lumen headlight, a pair of rear-facing RGB LED indicators, Bluetooth 4.0 for smartphone communications and, yes, even a built-in GPS. Join us after the break as we give you a brief tour of the Helios Bars and how it's well worth its $200 price point.

As you might expect, the LED indicators can be used as turn signals; simply press a raised button on either side of the center stem to turn them on or off. When paired with an iOS app called Helios Connect, however, the LEDs have a couple more functions. You can choose one of nine colors for a bit of ambient lighting, or you can enable a speedometer function that changes the color of the LEDs depending on how fast you're going; the app uses your phone's GPS to determine your speed. For example, red means you're a little slow at around 10mph while green indicates you're a pedaling speed demon at around 30mph.

What's more, you can use the LEDs as a form of turn-by-turn navigation. Enter in your desired destination into the app, and start pedaling. Once you arrive at a point where you need to make a turn, the appropriate indicator will flash so you'll know whether to go left or right. The team at Helios told us that it uses the bicycle-friendly directions from Google Maps, so hopefully there aren't too many side trips to the freeway.

Speaking of the app, you can also use it to turn the headlamp on and off remotely, or you can enable a proximity mode so that it turns on as you get closer to the bike and turns off as you walk away. The app is iOS-only for now, but fingers are crossed that Bluetooth 4.0 will be standardized in the next version of Android so that they can get started on making an app for that platform as well.

If the lights and the app aren't enough to strike your fancy, every Helios handlebar comes with a low-power GPS module and even cellular connectivity. Pop in a prepaid SIM card and you can track your bike from anywhere in the world -- send it a text and you'll get a reply with a Google Maps link to its location, hopefully recovering a lost or stolen bike in the process. The GPS module has a reserve battery all its own that should last up to 15 days, giving you sufficient time to track it down.

We had a chance to take an early look at the Helios Bars, and were impressed by the build quality of the reinforced aluminum chassis. The RGB LEDs shone brightly, as did the powerful 500-lumen headlight. Co-founder Kenneth Gibbs told us it illuminates both the ground and what's ahead of you, something not every bicycle headlight can do. The lights are powered by a pair of lithium ion batteries housed in each handlebar, which you can refuel by popping 'em in a charger. If you're worried about the handlebar being stolen, fellow co-founder Seena Zandipour assured us that it'll be installed using special security screws that only you can install or remove with a provided tool.

However, you can't buy these Helios handlebars just yet. The team says they're about to launch a Kickstarter campaign this Tuesday, which will hopefully lead to that. The Bars are available in both bullhorn and dropbar designs in either black or white for $199 each. Get in early enough for the Early Brid pricing, however, and you'll be able to snag one for $149. While we wait for their Kickstarter to begin, feel free to peruse the gallery above and the source link to get more information on the smartest pair of bicycle handlebars we've ever seen.

Update: Helios' Kickstarter page is now live -- watch the video below and head on over to the KS link if you'd like to back the project.

In this article: bicycle, bicycles, bikes, hands-on, haxlr8r, helios, kickstarter, makerfaire, makerfaire2013
All products recommended by Engadget are selected by our editorial team, independent of our parent company. Some of our stories include affiliate links. If you buy something through one of these links, we may earn an affiliate commission.