Earlier this month, Microsoft announced that it took down 1,400 Citadel botnets with the help of the FBI, and now Ballmer and Co. have divulged just how big of an impact the effort had. According to Richard Domingues Boscovich, the firm's Digital Crimes Unit assistant general counsel, the operation freed at least 2 million PCs across the globe from the malicious code -- and that's a conservative estimate by his reckoning. It's believed that more than $500 million has been stolen from bank accounts thanks to information gleaned from keystrokes logged by computers afflicted with the software. Though the chief botnet organizer is still on the loose and many machines are still burdened by Citadel, Domingues Boscovich says they "feel confident that we really got most of the ones that we were after."

In this article: Aquabox, botnet, Citadel, FBI, malware, microsoft
All products recommended by Engadget are selected by our editorial team, independent of our parent company. Some of our stories include affiliate links. If you buy something through one of these links, we may earn an affiliate commission. 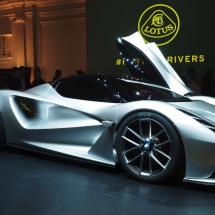 Lotus has already sold out of its electric hypercar for 2020