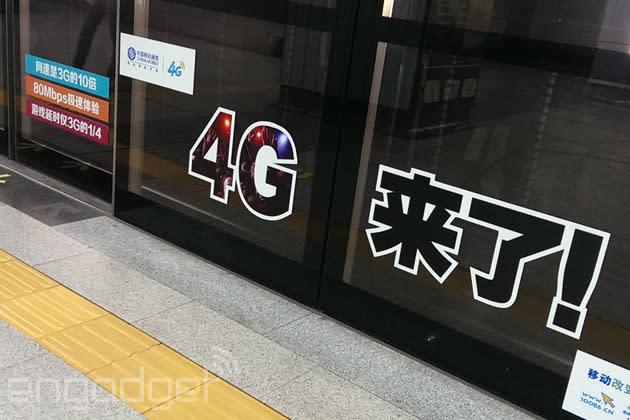 Just as promised, the Chinese government has finally granted TD-LTE licenses to the country's three carriers: China Mobile, China Unicom and China Telecom. This means the companies can launch their 4G services whenever they want, though the reality is only China Mobile, the world's largest carrier, has been conducting large-scale TD-LTE trials across the country. The remaining two companies have previously expressed that they plan to use the more common FDD-LTE as their main backbone, but the Ministry of Industry and Information Technology is allegedly waiting for TD-LTE deployment to mature before it also grants FDD-LTE licenses.

Either way, this is obviously good news for mobile phone manufacturers who want to dig deep into the Chinese market, as the faster service will motivate users to upgrade their phones -- especially with all the red pocket money they will be receiving in Chinese New Year at the end of next month. While there's already no shortage of TD-LTE devices out in the market, China Mobile recently told CNN that contrary to rumours, it has yet to secure a deal with Apple to sell iPhones. What's more bizarre is that a TD-LTE-flavored iPhone 5s has already been approved for use on China Mobile's network since September. Well, for the sake of Apple fans stuck with China Mobile, here's hoping the denial is just a cheeky decoy.

In this article: 4g, china, chinamobile, chinatelecom, chinaunicom, fdd-lte, licence, lte, miit, mobilepostcross, td-lte
All products recommended by Engadget are selected by our editorial team, independent of our parent company. Some of our stories include affiliate links. If you buy something through one of these links, we may earn an affiliate commission.