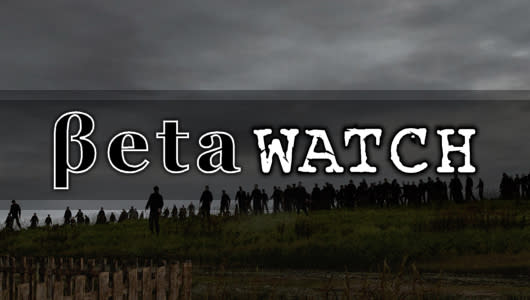 The entire idea of game testing has been put through the wringer in the past few years, with betas that aren't and open betas that are release in all but name. But when DayZ actually goes into testing, rest assured, that "alpha build" is actually going to be an alpha build. We applaud the bold decision to use a game's testing phase as, well, a testing phase.

League of Angels entered its beta testing this week, complete with events for testers to take part in. War Thunder also kicked off the testing of its Ground Forces expansion, expanding its previous world full of planes to include a few more... what's the word for those other things? Like cars, but with turrets and treads? Rhymes with pranks? Whatever it is, there will be a world of them.

Oh, yes, and there is a full list of betas past the cut, just as there is every other week. If something sneaked a cash shop in without our noticing, please, let us know down in the comments.

We consider an MMO to be in closed testing if it features either future test signups or an ongoing semi-private beta/alpha that cannot immediately and freely be accessed by the general public. Some are restricted by NDAs. This still qualifies even if the test does feature an active cash shop so long as the signups are restricted.

In this article: alpha, alphas, beta, beta-test, beta-testing, betas, betawatch, closed-beta, dayz, featured, game-testing, launch, launches, league-of-angels, massively-meta, open-beta, roundup, testing, war-thunder
All products recommended by Engadget are selected by our editorial team, independent of our parent company. Some of our stories include affiliate links. If you buy something through one of these links, we may earn an affiliate commission.