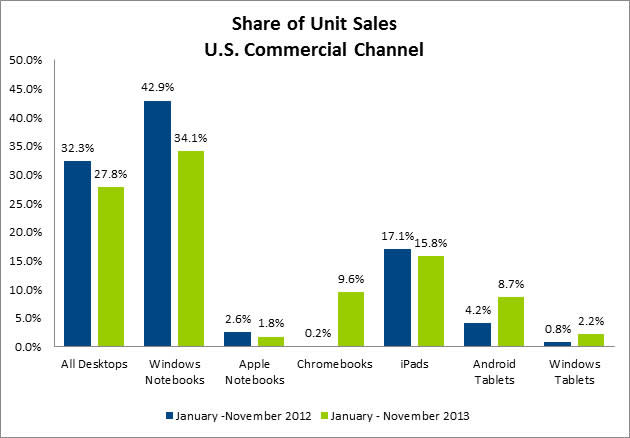 Chrome OS is at last gaining some momentum -- among US businesses and schools, anyway. The NPD Group reports that Chromebooks represented 9.6 percent of all computing devices sold through American commercial channels in 2013, or enough to surpass the market share of Android tablets, Windows tablets and MacBooks. Google's rise put the squeeze on traditional computers, which dropped from 77.8 percent of the commercial space in 2012 to 63.7 percent this year. NPD researchers don't believe that the PC is going away, but they note that the most successful companies diversified their gadget lineups. Samsung's combo of Android and Chromebooks helped it jump to 10 percent share of commercial sales in 2013, while PC-focused builders like HP took a bruising; it's clear that one-trick ponies won't thrive in the workplace for much longer.

In this article: apple, chromebook, chromeos, education, google, ipad, laptop, marketshare, microsoft, mobilepostcross, npd, retail, samsung, tablet, windows
All products recommended by Engadget are selected by our editorial team, independent of our parent company. Some of our stories include affiliate links. If you buy something through one of these links, we may earn an affiliate commission.