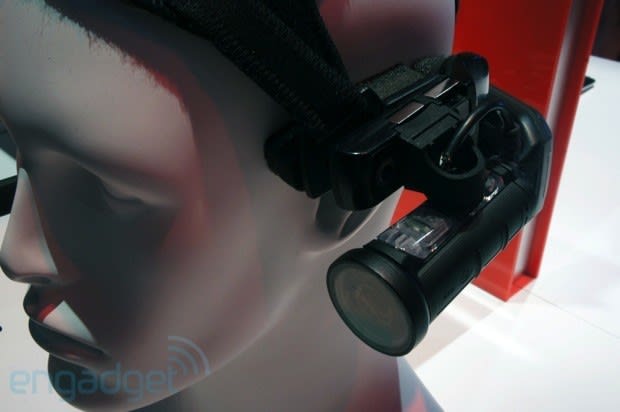 One of the more entertaining posts we wrote up at last year's CES was for the Golden-i, a head-mounted computer that lets field workers control their machines using voice commands and by moving their heads. The idea being: technicians, soldiers and other hands-on types ought to have their hands free if they're going to do their jobs safely.

Since then, the Golden-i has been replaced by the Motorola Solutions HC1, which uses the same technology but is now rugged enough to withstand four-foot drops. It also has a much more comfortable, modular design. So comfortable, in fact, that you have to wonder why the original wasn't designed this way. Now the padded inner lining is velcro-attached, so workers can adjust it about as easily as they would a bike helmet. That's convenient for people who live in their headgear 40 hours a week, but it's also nice for companies where employees share helmets -- after all, it'd be nice to take out your own lining so that you're not sharing the same sweat-soaked padding with someone else.

Additionally, workers can remove components like the speaker module, which they might need to if the headset's in need of cleaning. There's now a user-programmable button, which you can do to turn off features like voice commands. The eyepiece, too, is now attached to a sturdy, flexible boom, which lets you adjust the LCD position just so.

In terms of actual functionality, the core technology hasn't changed much: this is still a heads-up display that allows you to control things using your voice or by moving your head. However, the software has been improved in such a way that you can now share your screen -- or rather, your field of vision. So, for example, if a field worker is having trouble repairing something, he can have a distant colleague remote in and offer help -- sort of the virtual equivalent of looking over someone's shoulder. That's it in a nutshell, but we've got photo and video of the hardware below. Apologies if you have a fear of mannequins. 9
In this article: golden-i, hands-on, HC1, Head-mountedComputer, MotorolaSolutions, MotorolaSolutionsHc1, video
All products recommended by Engadget are selected by our editorial team, independent of our parent company. Some of our stories include affiliate links. If you buy something through one of these links, we may earn an affiliate commission.