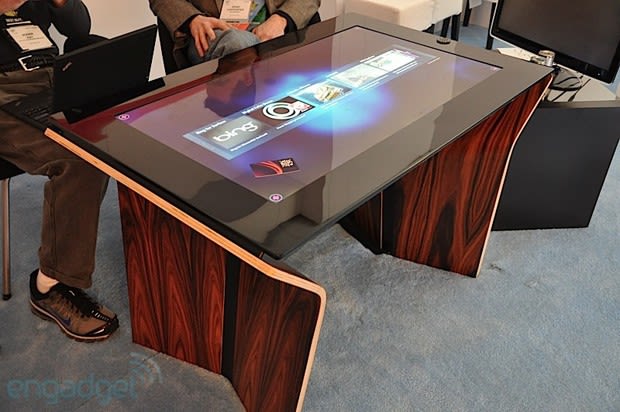 Amid all the origami variations of the PC at CES this year -- things that swiveled, folded, docked and rotated around their hinges -- one of the more intriguing form factor variations came not from a twist on the classic clamshell, insurgent slate or a hybrid of the two. Rather, it was a variation of the desktop via the all-in-one, one of the few of that embryonic breed known as table PCs courtesy of the Lenovo IdeaCentre Horizon.

Table PCs entered a broader collective consciousness in 2007 when Microsoft introduced Surface (a name it would later repurpose for its tablet line). A chunky, waist-high device that married a Windows PC with a 30-inch projection display and five embedded cameras, the original Surface offered an integrated multi-touch experience without a touchscreen.

Surface was capable of interaction with other devices that seemed magical, especially without using NFC. Place a marked glass on top of it and it could tell you the ingredients in the cocktail it contained. Place a WiFi-enabled camera on it and the photos would appear to spill out onto the screen, ready to be freely flipped, rotated, stretched and easily converted into emails via a simple postcard creation feature.

Alas, at about $10,000 and with most consumers already having a coffee table, Surface was too pricey for consumers. Mocked as a "big-ass table" in a parody video, it was relegated to a few hotels, casinos, AT&T stores and other public places. Prior to the release of the Surface tablet, Microsoft recreated the table-based incarnation using flat-panel technology. Samsung offers that product as the 40-inch SUR40 with Microsoft PixelSense. With a street price of about $8,000, it retains the ability to handle more than 50 touch points and interact with real-world objects.

Starting at around $1,699, though, the Lenovo IdeaCentre Horizon promises to deliver much of the Surface experience at a consumer price. Unlike the original Surface, it is practical to use as a regular Windows 8 all-in-one desktop. Snap in the stand and lay it flat, though, and you can take advantage of a Lenovo app store that includes optimized games and other media-centric apps for the device. They are very much in the spirit of those early Surface apps.

Moving to a device the size of the Horizon forces one to give up the kind of orientation features one takes for granted in today's smartphones and tablets.

A good example of how this works is with the classic board game Monopoly, an engaging version of which has been created for the iPad. But putting that same experience on the Horizon really opens it up to multiplayer interaction in a way that the tablet-driven experience cannot. You can see the whole board during everyone's turns. Air hockey comes closer to approximating the actual experience (although there was some controller lag in the version shown at CES).

Just as the iPad's larger palette enabled experiences that were either inferior or impossible on the iPhone, the same can be said for Horizon versus the iPad. This is especially true for multiuser experiences, a novelty in the realm of personal touch devices. That said, moving to a device the size of the Horizon forces one to give up the kind of orientation features one takes for granted in today's smartphones and tablets. With Horizon you don't rotate the tablet; you rotate around it.

Horizon is not the first time Lenovo has been led down the sometimes challenging path of creating its own app store; it rolled its own for TV apps when it introduced its Android-based smart TV (not available in the US) at last year's CES. Indeed, yet another challenge that 2007's Surface faced was competing for developer mindshare with Apple's iPhone. But just as modern Windows 8 dockable tablets or convertibles reduce risk for the PC manufacturer by serving as a PC as well as a tablet, Lenovo can fall back on the Horizon's use as a large all-in-one with normal viewing angles and keyboard input if optimized apps don't take off. It's low table stakes for a table PC.