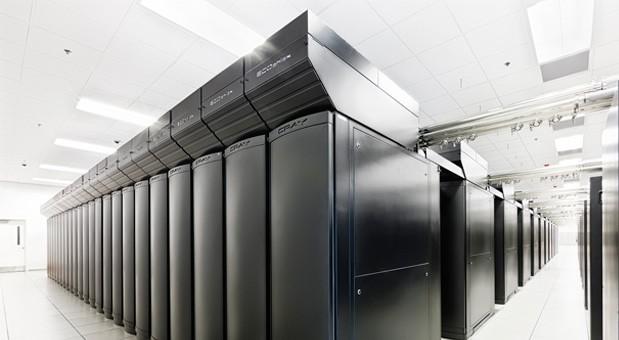 Things got a tad hairy for the University of Illinois at Urbana-Champaign's Blue Waters supercomputer when IBM halted work on it in 2011, but with funding from the National Science Foundation, the one-petaflop system is now crunching numbers 24/7. The behemoth resides within the National Center for Supercomputing Applications (NCSA) and is composed of 237 Cray XE6 cabinets and 32 of the XK7 variety. NVIDIA GK110 Kepler GPU accelerators line the inside of the machine and are flanked by 22,640 compute nodes, which each pack two AMD 6276 Interlagos processors clocked at 2.3 GHz or higher. At its peak performance, the rig can churn out 11.61 quadrillion calculations per second. According to the NCSA, all that horsepower earns Blue Waters the title of the most powerful supercomputer on a university campus. Now that it's cranking away around-the-clock, it'll be used in projects investigating everything from how viruses infect cells to weather predictions.

Today the Blue Waters supercomputer at the University of Illinois at Urbana-Champaign entered production, meaning the behemoth capable of performing quadrillions of calculations every second and working with quadrillions of bytes of data is now crunching numbers around the clock to help scientists and engineers across the country tackle a wide variety of science and engineering challenges.

Because Blue Waters is among the most powerful supercomputers in the world, and is the most powerful supercomputer on a university campus, it enables scientists to carry out research that would be otherwise impossible. The supercomputer, which was built from Cray hardware, operates at a sustained performance of more than 1 quadrillion calculations per second and is capable of peak performance of 11.61 quadrillion calculations per second. [How big are quadrillions? Check out our guide!]

During a launch celebration at the university's National Center for Supercomputing Applications (NCSA), Gov. Quinn read a proclamation declaring March 28 "Blue Waters Supercomputer Day," encouraging "everyone in the Land of Lincoln to recognize the important role that innovation and technological progress play in the future of our state."

Other speakers during the celebration-including University President Robert Easter, Chancellor Phyllis Wise, and Rep. Dan Lipinski, who serves on the House Committee for Science, Space and Technology-also emphasized the role that Blue Waters and the University of Illinois play in science and engineering discoveries.

Cora Marrett, acting director of the National Science Foundation, the federal agency that provided the deployment and operational funding for Blue Waters, emphasized the supercomputer's potential to fuel discovery and innovation and to benefit society. For example, scientists hope to learn more about how viruses infect the body's cells and to improve predictions of tornadoes and hurricanes, among other diverse projects.

To mark Blue Waters' move to full operations, several scientists launched simulation jobs on Blue Waters, showing the audience how the touch of a keyboard or even a tablet or phone allows them to interact with the supercomputer and begin complex research studies:

For more information about the Blue Waters project, see http://www.ncsa.illinois.edu/BlueWaters/.

In this article: BlueWaters, Cray, NationalCenterforSupercomputingApplication, NationalScienceFoundation, NCSA, NSF, supercomputer, Tesla, UniversityOfIllinois
All products recommended by Engadget are selected by our editorial team, independent of our parent company. Some of our stories include affiliate links. If you buy something through one of these links, we may earn an affiliate commission.