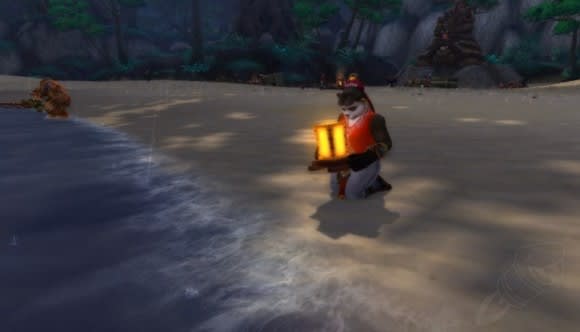 Every Thursday, The Overachiever shows you how to work toward those sweet achievement points. This week, Allison desperately wishes to return to the days of "server time."

Confession: This article was originally going to be about achievements you could get from unexpected places, because I thought it would be cool to run a column on the areas you pass by a lot without necessarily realizing there are points there for the taking. I'd worked all the way up to Wanderers, Dreamers, and You, which I've been meaning to do for a while but never got around to ... and then I hit a giant road block.

Why? This achievement was one of those unintentionally affected by changes in patch 5.1 that altered event times for a lot of servers. Most players will probably remember when the Stranglethorn Fishing Extravaganza disappeared for a few months while Blizzard tried to figure out a way to square it with Cross-Realm Zones. The Fishing Extravaganza returned alongside a new system that standardized most event times across servers in an effort to simplify what was happening and when. The Wanderer's Festival was one of the affected events.

After spending hours trying to track down and confirm the event time schedule for servers across the European, North American, and Oceanic servers, I decided it probably merits an article all to itself because the Wowhead thread is a giant rat's nest of conflicting and outdated information. Also, it's not enough to be there while the festival is actually happening, and if you don't get there early, you probably won't have a shot at a battle pet you can't get anywhere else.

I am not too proud to admit I need help with this one.

Where do I go? The Wanderer's Festival is an event that takes place every Sunday in the Krasarang Wilds at 72,31, which is a little bit east of the Incursion if you're looking at the map. Players who have quested in Krasarang probably know it better as the beach in front of the Liu Lang and Shen-zin Su statue -- the pandaren on top of the turtle.

So what happens? Lorewalker Cho shows up to sing Liu Lang's hymn, lanterns and a keg are brought out, and there are pretty fireworks. Most importantly, you'll have an opportunity to get a level 23-25 turtle battle pet here that you can't get anywhere else. However, only three to five spawn at the beginning of each Festival, and they tend to get snapped up quickly. (LSavage did advance a theory as to how you could get some to respawn, but I don't know if this would work.)

It's a neat little event that I think exemplifies how much work Blizzard did to stuff the continent full of random, cool things.

How do I get the achievement? It's not enough to be present at the festival as it's actually happening: You have to be there for the opening or closing ceremonies. The festival lasts for roughly 23 minutes, so if it starts at 9:00 pm server time, it'll end around 9:23 pm. Show up a few minutes early to be safe. If you miss it, show up again around 9:20ish. As long as your character's in the general area, it should get the achievement.

So when does the festival take place? Oy. The same question started a very lengthy, and at times piqued, discussion thread at Wowhead because patch 5.1 changed event times in an effort to standardize things for cross-realm zones, and then Daylight Savings Time (as many players noted) changed it again. Except that it may not actually have changed anything in Europe, which is already supposed to have had the CRZ-altered time system in place, although one player reported that it did, and ... my head hurts.

For some of you, this achievement's going to be fairly convenient. For others, you may find yourself setting an alarm and wishing you lived on the opposite end of whatever country you're in now.
SO WHEN THE HELL AM I SUPPOSED TO SHOW UP? I don't know, but I'll tell you what I'm going to do. Park yourself on the beach in front of the turtle at 8:45 pm server time with a large bottle of absinthe, and put a drinking bird on your space bar in order to keep your character from going offline. Chug the absinthe. Go to sleep at your desk. If the event happens, you'll get the achievement, but you'll be too blitzed to care. If the event doesn't happen, you won't get the achievement, but you'll be too blitzed to care.