Apple's new Air could be the MacBook for everyone 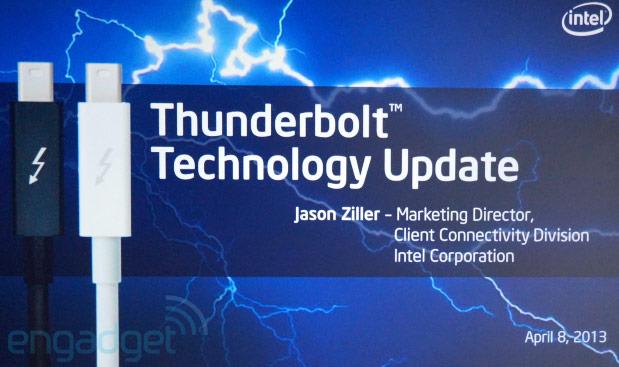 Here at NAB, Intel just introduced the next generation of its Thunderbolt interface, which promises a data rate of 20 Gbps in both directions (on each of the two channels) as opposed to 10 Gbps for the previous version. Of course, the company stepped back for a moment first, boasting that Thunderbolt currently has about 200 licensees, and more compatible devices -- along with new, thinner cables -- should be coming out in the following months. Building up to the big reveal, Intel also shared some info about its new Thunderbolt host controller, (code-named Redwood Ridge), which will be built into some of Intel's upcoming fourth-gen Core processors.

But let's talk about the real news: the next-gen Thunderbolt tech (code-named Falcon Ridge) enables 4K video file transfer and display simultaneously in addition to running at 20 Gbps. It will be backward-compatible with previous-gen Thunderbolt cables and connectors, and production is set to ramp up in 2014. An on-stage demo with fresh-off-the-press silicon showed the new Thunderbolt running 1,200 MBps, which is certainly a step up from what's currently on the market.

Update: We've added a video of the Thunderbolt demo from Intel's stage. Hop on past the break to check it out.

In this article: intel, nab2013, thunderbolt, video
All products recommended by Engadget are selected by our editorial team, independent of our parent company. Some of our stories include affiliate links. If you buy something through one of these links, we may earn an affiliate commission.