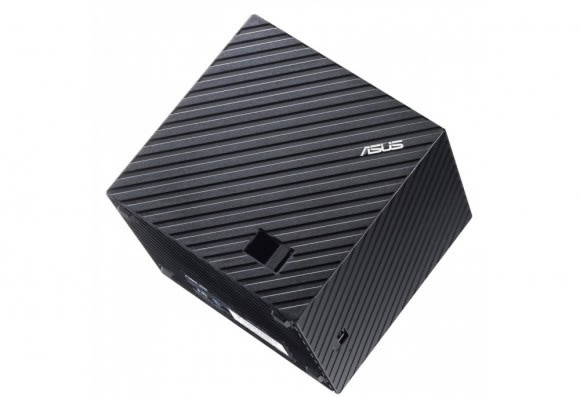 The past year has been a busy one for Google TV -- in fact, with the big I/O conference right around the corner, we're sitting down to review our fifth such device in the past 12 months. The ASUS Cube naturally does everything one would expect from a Google TV set-top box, but it also has a few tricks of its own, like a mic for voice search and a unique "Cube" main menu interface. At $139, it's priced just above the Vizio Co-Star and far below the Sony NSZ-G57. So how does it stack up? Let's see. It's the best Google TV set-top box yet, at a reasonable price.

Be the first to review the Cube?
Your ratings help us make the buyer’s guide better for everyone.
Write a review

Obviously, when you name your device after its shape, your intent is to draw attention to what you believe is a unique differentiator, so let's start there. The ASUS Cube is of course a cube, with every edge measuring just under five inches. Judging by the fact that it is bottom-heavy, we suspect the top half of the device is empty and wonder why the extra space wasn't used to house an internal power supply -- but we do appreciate the decision to go with a power-brick style over a wall wart.

Like every Google TV, there are two HDMI ports so you can pass through your cable or satellite provider's set-top box and share the coveted input-one. That's the only audio or video output, though; there aren't any for older TVs or even a digital audio out for those without a free HDMI port on their AV receiver. There's also a USB port on the front and one around back, which you can use for external storage or to quickly watch content off a flash drive. The 10/100 Ethernet port is readily available for those lucky enough to have a wired connection near the TV, while 802.11b/g/n should handily suffice for everybody else. The last port to speak of is for connecting an IR emitter, which comes in the box and is required if you wish to control your TV or AV receiver via IR using the Cube's remote, which doesn't emit IR on its own. This is useful, no doubt, but we do wish the Cube included internal IR emitters too, especially after seeing how well the Logitech Revue's integrated IR system works.

Inside, the Cube shares the same Marvell Armada 1500 chipset as its more recent Google TV competitors. Although there's technically 4GB of flash storage, only 2GB are actually available for use. The HDMI port supports just about every HD resolution and frame rate you might want, but there's no mention of 4K. It's also able to natively pass the Dolby Digital Plus signal from the likes of Netflix and Vudu if your AV receiver can accept it. The last trick the HDMI port features, that we are always pleased to see, is the inclusion of HDMI-CEC. Basically, this enables the TV and receiver to automatically turn on or off when the Cube does with more reliability than IR can provide, but volume control via CEC wasn't something we were able to test.

In contrast to most home theater gear, where you don't even put batteries in the included remote and use a universal remote instead, the remote that comes bundled with a Google TV box isn't easily replaceable. We're happy to report, though, that the Cube's remote makes the box stand out in a good way. The overall fit and finish is solid thanks to a grippy texture, solid feel and well-placed buttons. The highlight, however, is the trackpad located on the opposite side. It performs reliably as a pointing device and you can quickly toggle it into a push-button d-pad (via an accessible button on the side) for standard up-down-right-left navigation. The good news, if you can call it that, is that the trackpad works so well that you really miss it in apps that don't support point-and-click, like Netflix. The other miss here is the lack of a backlight, which you'll find on at least one other Google TV box.

The remote does stand out in another way that ASUS is happy to point out -- no, not motion-control gaming, the Vizio Co-Star has that as well -- it features a mic and buttons to activate Google's Voice Search. The Hisense Pulse also features a mic, but previously only the LG G2 Google TVs could use the remote's mic for Voice Search. This worked as you might expect -- so no, not perfect -- except that we had to have the remote a little closer to our mouth than we might normally prefer.

Overall the remote is a reason to buy the Cube, and aside from some range problems we had when trying to use the keyboard, we really like it. That said, it isn't the be-all, end-all remote and the lack of macros will mean you'll probably keep your programmable remote around.

The Cube is a solid Google TV set-top box but it isn't going to change anyone's mind about Google TV.

The Cube's name doesn't only describe the box's shape; it also covers the design of the main menu. The user interface is a three-dimensional hexahedron with only two sides exposed. The left side is used to indicate which of the 11 main sections is currently selected (Favorite, Photo, Education, News, Music, Sports, Social, Games, TV & Movie and Home) and the right offers up six sub-menus to drill into. We suppose this will be a matter of personal preference, but this particular editor isn't a fan. Overall, you're left with a bunch of white space and a less-than-awe-inspiring effect. Happily, though, you can easily select the All Apps tile from the Home menu and still have access to the familiar Google TV grid of applications. At least the box has the power to pull off the fancy menus without any noticeable slowdowns, though.

Speaking of applications, the typical offerings from Google are here, including HBO Go, Netflix, Chrome, Google Play, Google Music and PrimeTime. But ASUS does add a few of its own to distinguish the Cube. The two most notable, and perhaps unique, are the Whiteboard to turn your TV into a huge collaboration device, and ASUS Web Storage, which comes with a free 50GB account for easily accessing your content in the cloud. Some of your media is probably still hanging around the house and so ASUS also included apps for accessing your movies, music and photos. These can grab content via DLNA, FTP, SMB or an external, USB-attached hard drive -- most typical codecs and containers are supported, but check the full list on the support site to be sure your favorite is there. The last app you won't have to hunt for on the Play store for is a task killer, as one is included too.

ASUS has done a good job of setting the Cube apart from its Google TV competitors with its software -- again, judge the Cube user interface yourself -- but at the end of the day it's still Google TV 3.2. So all the good (and bad) things we've said about it previously still apply here. The only other bit we'd add is that there should be a screen saver or dimmer feature for those with displays susceptible to burn-in. Also, other Google TV boxes have done a better job adding menu overlays to facilitate multi-tasking while in apps (the Vizio Co-Star's App tray comes to mind).

From the very beginning, Google TV has offered the best browser experience for televisions, but a good browser experience alone can't win over mainstream consumers. In almost three years, Google has continued to iterate its TV offering through both software and hardware (via partners). The Cube has a strong place in that lineup, bringing new features and a competitive price. Sure, the Vizio Co-Star is still less expensive, but the Cube's remote is closer to that of the much more expensive Sony NSZ-G57's in both ergonomics and usefulness. The added software from ASUS will surely help set this device apart from the competition, but the Cube interface? Not so much. In the end, the Cube is a solid Google TV set-top box but it isn't going to change anyone's mind about Google TV. More than anything, though, our biggest hesitation in recommending the Cube is a matter of timing. With Google I/O right around the corner, we can't help but worry that the time to buy a new Google TV isn't now.

In this article: asus, Asus Cube, AsusCube, cube, Google TV, GoogleTv, hdpostcross, qube, review
All products recommended by Engadget are selected by our editorial team, independent of our parent company. Some of our stories include affiliate links. If you buy something through one of these links, we may earn an affiliate commission.