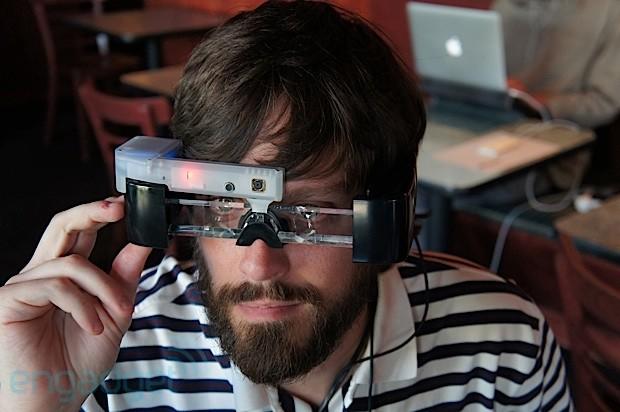 Epson's 3D display glasses, the Moverio BT-100 have been floating around as a development platform for a couple years, and APX Labs is the latest to hack the headset. APX Labs is a software firm best known for creating Terminator Vision augmented reality tech for the US military, and it decided to use the BT-100 as a vehicle to develop and showcase a smart glasses platform it's built to work for both business and consumer applications. In order to get the functionality it needed, APX grafted a 5 megapixel camera, mic and a full suite of motion sensors to provide nine-axis head tracking onto a Moverio headset. All that gear is shoved into a 3D-printed module and attached to the BT-100 to turn it into a pair of smart glasses. In addition to the cameras and sensors, APX also hacked an Epson daughter board onto the Moverio's controller to allow an HDMI video feed from a smartphone to be shown on the displays. This result? A system that understands where you are, what you're seeing and hearing and a UI that allows users to glean information from the world around them using voice commands and head gestures. That should sound familiar to fans of Google Glass, but by using Epson's binocular displays, these smart glasses can convey depth in a way Mountain View's monocle cannot. (Not to mention that Glass doesn't even do AR apps... yet). The hardware we got to see was a crude prototype built for demo purposes only, but the software platform shows promise and Epson's got a version two Moverio headset in the works -- so perhaps you can see a bit of the future of smart glasses in the video after the break.

In this article: apxlabs, AR, bt-100, epson, EpsonMoverioBt-100, hands-on, headset, mod, moverio, smartglasses, video
All products recommended by Engadget are selected by our editorial team, independent of our parent company. Some of our stories include affiliate links. If you buy something through one of these links, we may earn an affiliate commission.