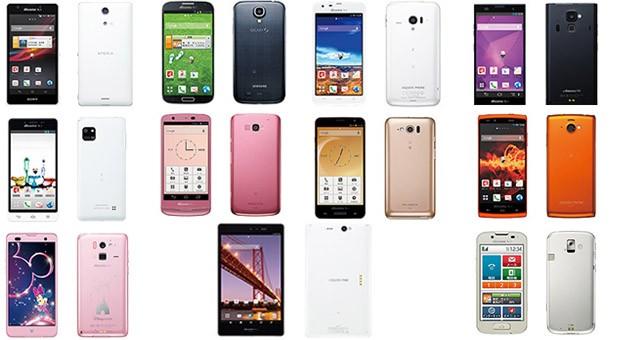 While the semi-annual parade of new smartphone models at NTT DoCoMo often reveals some unexpected devices, this summer it had a bumper crop: we've already seen the new Sony Xperia A, Sharp's Aquos Phone Zeta and Aquos Pad SH-08E plus a Galaxy S4 in "arctic blue." Seven more phones round out the lineup and NTT DoCoMo is trumpeting 2,100 mAh minimum batteries, LTE, NFC and quad-core processors for the entire gamut. Other standout models include Fujitsu's 5.2-inch, 1080P Arrows NX F-06E, a model with a 16-megapixel camera you'll likely never see stateside, Panasonic's Eluga V P-06D with a 4.7-inch 1080P screen and a whopping 2,600 mAh battery, and Disney Mobile's F-07D, which should be an endurance wonder with a 720P screen and 2,600mAh cell. Naturally, there's a rainbow of new hues for most of the models, which will roll out over the summer in Japan -- click the source link PDF for detailed specs or check the PR after the jump.

TOKYO, JAPAN, May 15, 2013 --- NTT DOCOMO, INC., a personalized mobile solutions provider for smarter living, announced today its 2013 summer lineup of 11 models, including nine smartphones, one tablet and one Raku-Raku ("easy-easy") SMART PHONE, for launch in Japan on or after May 17. The new collection meets a broad range of mobile needs for both existing smartphone users and first-time owners seeking enhanced safety and security along with extra-convenient and innovative solutions.

Some of the many attractive features of DOCOMO's new lineup are as follows:

All models with large-capacity batteries rated at 2,000mAh or more, capable of more than 45 hours of normal browsing, app use and talk time. Five models equipped with batteries over 2,500mAh.
Four smartphones offering touch-free operation of apps by simply hovering a finger over the screen.
Two smartphones installed with "docomo Simple UI," an extra-easy user interface for smartphone beginners.

All models compatible with DOCOMO's XiTM ("crossy") LTE mobile service for a max. downlink of 100Mbps in the 2GHz, 1.5GHz and 800MHz bands.

All smartphones and one tablet equipped with enhanced quad-core CPUs for maximized enjoyment of mobile games and video content.

The lineup includes new body colors for two popular feature phones that were launched in the 2012 winter lineup.

Two models have been specially designed to enable easy operation with one hand.

The launch date of each model is listed in the attachment.

In this article: BatteryLife, lineup, mobilepostcross, NTTDoCoMo, quad-core, Summer2013
All products recommended by Engadget are selected by our editorial team, independent of our parent company. Some of our stories include affiliate links. If you buy something through one of these links, we may earn an affiliate commission.