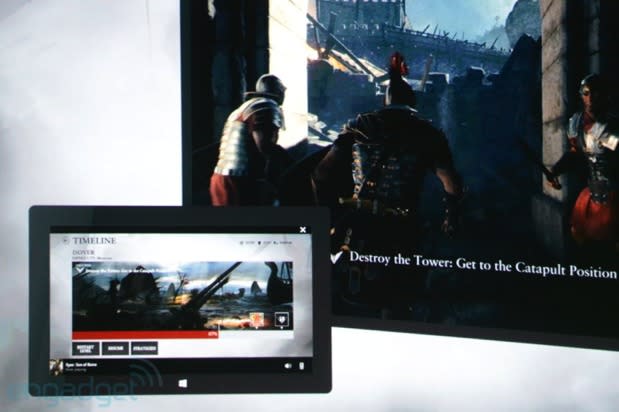 It's not just the hardware and games that are getting an overhaul in Microsoft's next generation, it's the services too. Today at E3, Microsoft demonstrated the new SmartGlass app compatible with Xbox One. Using Crytek's Ryse: Son of Rome for the demo and running off of a Surface tablet, reps were able to show how real-time info can be streamed to the player on the second screen. This extended functionality also encompasses the ability to start a single player game, setup multiplayer, buy add-on content while in-game and view leaderboard stats, as well as tips and tricks for concurrent gameplay. All of this comes in addition to the video scraping feature, which utilizes Twitch.tv, Microsoft had previously announced for Xbox One SmartGlass -- just as promised.

In this article: e32013, hdpostcross, microsoft, SmartGlass, XboxOne
All products recommended by Engadget are selected by our editorial team, independent of our parent company. Some of our stories include affiliate links. If you buy something through one of these links, we may earn an affiliate commission.