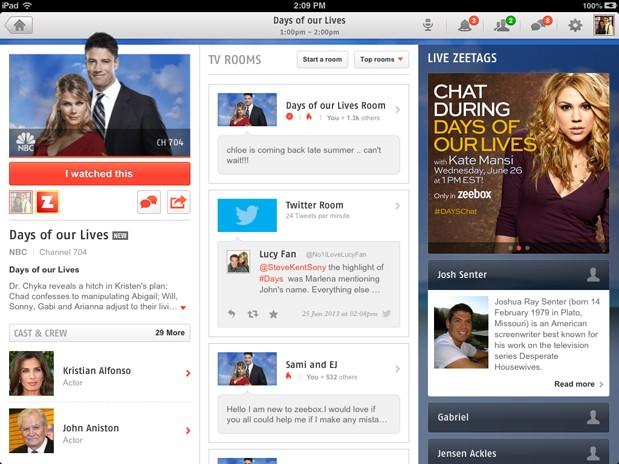 Zeebox is clearly busy these days. It just added automatic show syncing and recommendations to its second screen app a few days ago, and it's back with a new developer portal that opens the Zeebox APIs to everyone, not just partners. Those building mobile and web apps can now integrate Zeebox's guides, social networking and tagging into their projects, as well as create synchronized widgets for Zeebox's own release. If you're inclined to build on the company's TV experience, it's free to try the programming tools you'll find at the source link.

New York/San Francisco (The TV of Tomorrow Show) – June 25, 2013 – zeebox, the second screen technology leader, announced today a significant update to its consumer app, extending the power of synchronicity to time-shifted shows through automatic content recognition (ACR) technology and enhancing the consumer experience with personalized TV show recommendations. The company also announces the launch of the zeebox Developer Portal, making its award-winning features available to the wider community so developers can become active players in the creation of second screen experiences in zeebox and beyond.

"We've been listening to our biggest fans who love to use zeebox with live TV, but also want to be able to replay the experience when they're watching catch-up," said Anthony Rose, CTO, zeebox. "By adding ACR, we're allowing fans to have the same experience as those who watched live. And this is just the beginning – we have a raft of additional features coming out later this summer to create the best second screen experience for time-shifted TV."

The latest release of zeebox further enhances and personalizes the second screen experience. Using Automated Content Recognition (ACR), zeebox gives fans a way to immediately jump to their favorite shows without searching through the guide. Users can listen for live shows as well as time-shifted (VOD/DVR'd) shows from the past seven days and enjoy the same enhanced show experience across both. zeebox listens when a user launches the app to take them directly to the show they're watching on TV, after which zeebox's ACR feature is opt-in (click to listen) so it won't drain batteries.

Discovering TV content with zeebox will get even better with the new recommendation service, which provides viewers with a curated set of recommended TV shows based on their previous viewing history. This complements the TV Picks page, which highlights what's most popular, what's buzzing the most and what friends and celebrities are watching.

In addition to ACR and personalized recommendations, the latest zeebox release builds on the excitement of the recently launched TV Rooms, with some super-charged new features, including:

· Rich Media Content & Enhanced Sharing – enables viewers and fans to upload photos, add embedded YouTube and Vimeo videos, animated GIFs and other links to posts, making the TV Rooms conversation even richer. Broadcasters can use this to deliver additional content, including teasers and trailers, direct to their most committed fans.
· Enhanced Administrative Functionality – allows more control and moderation features for superfans or content owners to manage their own TV Rooms directly from TV Rooms.

The new zeebox Developer Portal was launched in response to many requests for zeebox to make its TV-related features and technology more broadly available. The portal provides developers with access to zeebox's application programming interfaces (APIs), including its famous contextual 'zeetags', its TV-specific social network, social buzz related to TV shows, as well as the ability to create and integrate synchronized widgets to run inside the zeebox app.

"Our partners already use our APIs to power a number of features in their own apps," said CTO Anthony Rose, "but we firmly believe the social TV revolution is in its infancy, and that much of the innovation is yet to come. For this reason, we hosted a hackathon for developers at TVOT last weekend and are opening up our APIs to the wider developer community."

Now anyone has the ability to develop features that make use of the zeebox API, including – for example – access to 'zeetags', or TV show schedule information, to allow enhanced contextual data and programming information to be shared on web sites and in other apps.

zeebox is available for free on iOS and Android devices in the App Store, Google Play or at zeebox.com.

In this article: api, app, developer, hdpostcross, secondscreen, television, tv, web, zeebox
All products recommended by Engadget are selected by our editorial team, independent of our parent company. Some of our stories include affiliate links. If you buy something through one of these links, we may earn an affiliate commission.