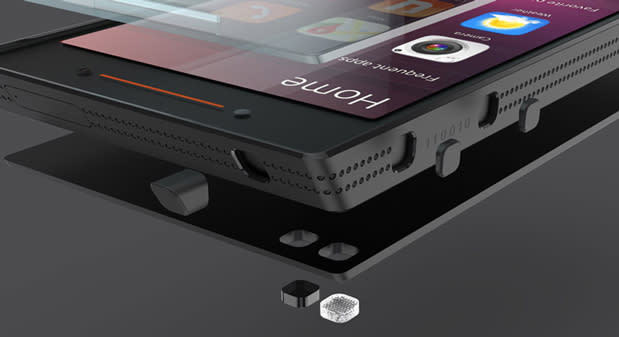 $10,311,220. It isn't sufficient to greenlight Canonical's innovative hybrid smartphone, but it is just enough to beat the sum raised by the Pebble smartwatch and thereby steal the crowdfunding record. Well, sort of, at least. It depends on whether the amount pledged is all that matters, regardless of whether the project actually comes to fruition -- as happened with both the Pebble on Kickstarter and Indiegogo's previous record holder, the Scanadu Scout. More importantly though, Ubuntu Edge may have reached the point where it'll have a second chance even if it doesn't achieve the required backing of $32 million: Canonical founder Mark Shuttleworth told the BBC that some manufacturers have noticed all the hubbub and have come "out of the woodwork" to discuss taking the Android / Ubuntu concept forward, such that August 21st may not prove to be a terminal deadline.

16 August 2013 – Canonical's campaign to develop the Ubuntu Edge Smartphone has smashed the record for the largest ever amount to be sourced from crowdfunding. The long-standing record, which stood at $10,266,844 and was previously held by the Pebble Watch, was surpassed at around 4am BST this morning. There are still six days of the campaign to run.

The Ubuntu Edge Smartphone, designed to be used both as a phone and a desktop computer, also broke the record for being the fastest to raise $2m (in under eight hours) and raised its first $3m in under 24 hours. Last week also saw the Ubuntu Edge receive its first corporate backer in the shape of Bloomberg, which pledged $80,000 for its "Enterprise 115" package. The story has also been tweeted on average twice a minute every day since the appeal launched (source: Sysomos), while a Reddit IAMA Q&A session for Mark Shuttleworth, founder of Ubuntu, generated over 3,200 questions.

If the appeal is fully funded, Ubuntu's vision is to make separate mobile phones and laptops a thing of the past. The Ubuntu Edge smartphone will run Android and Ubuntu's mobile operating system, so it can convert into a fully integrated desktop PC when connected to a keyboard and monitor.

Jane Silber, Canonical's CEO said: "When we started this campaign three weeks ago, we hoped it would resonate with our community. So, to break the world record for a crowdfunding campaign is absolutely mind-blowing. We felt that innovation had substantially slowed down in the mobile industry, so wanted to address this. We're still astonished by the generosity of our community and will continue to do all we can to make the Ubuntu Edge a reality."

The Ubuntu Edge smartphone appeal is being run on Indiegogo and has a funding target of $32m to fund a single production run of 40,000 units. The handsets are only being offered to supporters pledging $695 or more. They will not be available to buy at launch.

In this article: canonical, crowdfunding, edge, indiegogo, mobilepostcross, pebble, ubuntu
All products recommended by Engadget are selected by our editorial team, independent of our parent company. Some of our stories include affiliate links. If you buy something through one of these links, we may earn an affiliate commission.