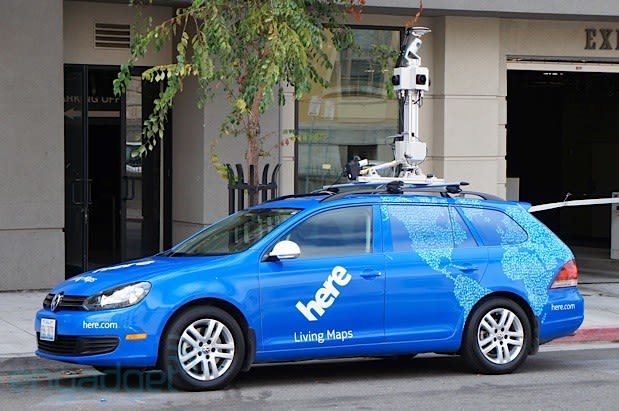 What do the Lumia 920, Surface Pro, Velodyne LIDAR, NovAtel GPS and Jetta TDI wagon all have in common? They're all essential parts of the next generation Nokia Here collection vehicle. When Here was announced last fall, we checked out v1.0 of the car which featured an elaborate but clunky set of sensors and cameras. That's also when Nokia announced it was acquiring Earthmine, a Berkeley-based 3D-mapping company. Nine months later, we're seeing the results of this collaboration with v2.0 of the collection vehicle. It's a simpler and more advanced setup which provides much improved image quality. Nokia recently invited us to take ride in a next generation Here car -- check out the gallery below then hit the break for our video and breakdown of the technology.

Nokia's John Ristevski -- Head of Reality Capture and Processing for Here -- walked us through the different components that make up the next generation collection vehicle. It all starts with a VW Jetta TDI wagon or Subaru Forester / Crosstrek. The former is attractive for its fuel economy, the latter for its AWD drivetrain and ground clearance. Unlike the first generation equipment -- which required modifications to the roof plus the installation of a wheel sensor and cabinet full of gear -- v2.0 uses a common Thule roof rack and a single ruggedized case. As such, it only takes two people about 30 minutes to convert a car (like a rental, for example) into a collection vehicle. The collapsible mast includes (from top to bottom) a NovAtel GPS antenna, Velodyne HDL-32E LIDAR sensor, four 16.2-megapixel cameras each with 180-degree field-of-view and a NovAtel SPAN-CPT inertial measurement unit. A skid prevents any low-hanging cables from catching the GPS antenna and LIDAR sensor. The new imaging system provides much higher resolution, color fidelity and dynamic range than before.

The signal from these sensors is routed to a ruggedized case that fits in the passenger footwell and connects to the car battery. It contains an x86-based computer running Linux, 1TB 3.5-inch removable SATA hard drive and 12V backup battery. A Nokia Lumia 920 and Microsoft Surface Pro (mounted on a stand bolted to the seat rails) complete the package -- the former is powered by a standard USB car charger, the latter by the aforementioned box. The phone acts as an LTE hotspot / in-vehicle WiFi network for the tablet and the Linux computer. Special software developed in-house (called Route PhD) is installed on the Surface Pro to control the x86 system. The driver receives a route over LTE and the software gives them spoken navigation instructions for an efficient route that minimizes overlap (there's typically about 30% redundancy on purpose). After turning the data collection on, they simply follow the navigation instructions to complete the entire route. When the hard drive is almost full, the software notifies the driver who drops it off with FedEx or UPS. The LTE connection is also used for status updates and fleet tracking.

Nokia Here collection vehicles v2.0 are now being deployed in 27 countries across five continents, so the next time you see one roaming around your neighborhood, you'll know exactly what's happening inside.

In this article: car, collection vehicle, CollectionVehicle, GPS, hands-on, Here, LIDAR, Lumia, Lumia920, maps, Microsoft, mobilepostcross, nokia, NokiaHere, Surface, SurfacePro, vehicle, Velodyne, video
All products recommended by Engadget are selected by our editorial team, independent of our parent company. Some of our stories include affiliate links. If you buy something through one of these links, we may earn an affiliate commission.