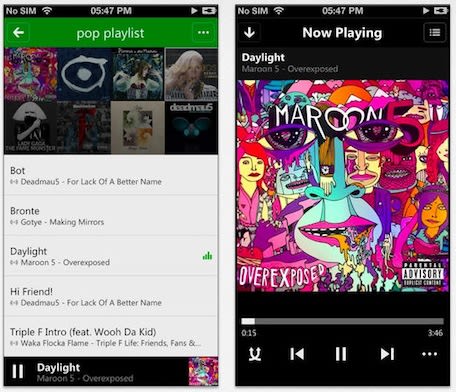 Just weeks before Apple is expected to release its iTunes Radio streaming-music service, Microsoft has released Xbox Music for iPhone. Xbox Music was first unveiled last October and allows users to listen to ad-supported or ad-free music (depending on whether they have a paying subscription or not) on their Microsoft devices, such as Windows Phone, Xbox 360 and Windows PCs.

With today's launch on iPhone and Android phones, Microsoft appears to acknowledge that it thinks Apple's iTunes Radio could become a big player on the streaming-music front -- something it hopes to stave off with the expansion of Xbox Music.

Today's release of the app offers users the following:

The company also says it will be releasing an update soon that will allow users to download music for offline listening.

Though Xbox Music is a free download, mobile users will be required to have an Xbox Music Pass to listen to the service on their iPhone. Xbox Music Passes are available for a free 30-day trial, but cost US$9.99 a month after that.

In this article: iPhone, microsoft, xbox music, XboxMusic
All products recommended by Engadget are selected by our editorial team, independent of our parent company. Some of our stories include affiliate links. If you buy something through one of these links, we may earn an affiliate commission.
Share
Tweet
Share