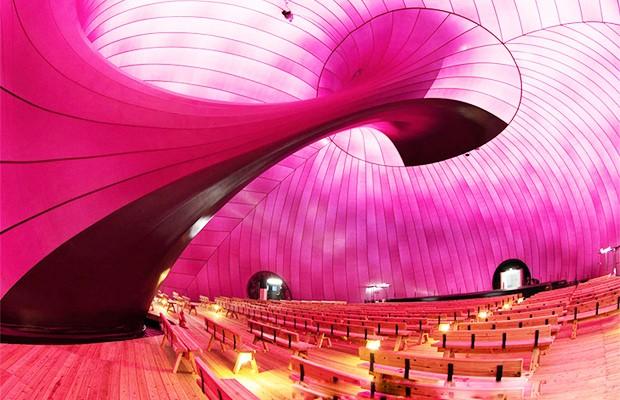 Most of the world still runs on fossil fuels, but renewable energy is making big gains. Not only are renewables better for the environment, but they're also becoming just as cost-effective as their dirtier counterparts. A new study finds that wind farms are less expensive than new coal-fired plants, and they cost about the same as new natural gas plants. Speaking of energy costs, Inhabitat shared a new infographic this week that shows how much it would cost for the entire world to switch over to renewable energy. In other energy news, the world's largest solar thermal energy plant opened in California's Mojave Desert. Once it's operational, the plant will produce enough energy to power 140,000 homes. The largest photovoltaic plant in the world is set to be built in India, and it will produce 10 times as much energy as the next-largest solar plant in the country. And in another exciting development, a team of German and French scientists produced the world's most efficient solar cell, which boats an efficiency of 44.7 percent.

Ever wonder what the acoustics are like inside a gigantic balloon? Sculptor Anish Kapoor and architect Arata Isozaki decided to find out when they built the world's first inflatable concert hall in Tohoku, Japan. The giant, jelly bean-shaped structure is made from a translucent purple membrane, and it will open to the public next month. In a bid to outdo every skyscraper on Earth, science fiction author Neal Stephenson is developing a concept for 12-mile-tall building that could launch rockets into space. Elsewhere in the design world, Inhabitat toured the Parkroyal Hotel in Singapore, which features some surreal sky gardens that wrap around the edge of the glassy tower. And Studio di Architettura Daniele Menichini completed Green Zero, a minimalist modular home that is topped with super-thin solar panels.

On the green transportation front, young people are changing the game. A team of students in The Netherlands broke the world record for vehicle acceleration by traveling from 0 to 62 MPH in just 2.15 seconds in an electric car. And a team of high school students from Evansville, Indiana won the AutoZone Challenge by building a teardrop-shaped vehicle that gets a whopping 849 miles to the gallon. In a good bit of news for green cars, California state lawmakers passed legislation to extend tax credits for plug-in hybrid and electric vehicles until 2024. And one of the niftiest new options in urban mobility is the Xkuty One electric bike, a stylish, silent electric bike that you can program with your iPhone. The Xkuty app will even call a pre-programmed emergency number if it detects that an accident has occurred.

Are you hard on your phone? The new Rhino Shield smartphone case is thinner than Gorilla Glass, yet it's strong enough that you can take a hammer to it. And you might want to invest in a protective casing if you're planning to buy Apple's latest 5c and 5s iPhones, because recent tests found that they're even more prone to breaking than previous models. And for the ultimate phone security system, Nymi has developed a smart wristband that uses your heartbeat to unlock your phone. In other tech and science news, a team of engineers at the University of Alberta has developed a new filter that can detect E. coli in a matter of minutes (instead of the standard 24 or 48 hours), and scientists have also discovered a blueprint for the world's first universal flu vaccine. Inhabitat attended Maker Faire in New York City last week and rounded up eight of the most impressive 3D-printed objects on display at the event. And in an effort to clean up space junk, Swiss Space Center at EPFL has launched CleanSpace One, a space "janitor" that is designed to clean up 370,000 pieces of space debris.

In this article: eco, green, inhabitat, transportation, xkuty
All products recommended by Engadget are selected by our editorial team, independent of our parent company. Some of our stories include affiliate links. If you buy something through one of these links, we may earn an affiliate commission.