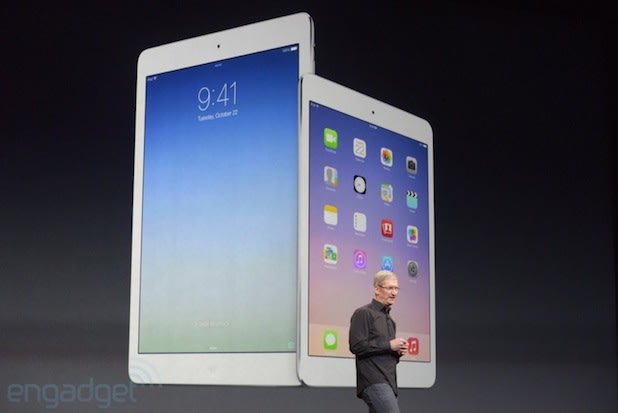 In reporting its latest quarterly earnings today, Apple announced record fourth-quarter sales of iPhones -- 33.8 million, up 26 percent from 26.9 million in the same quarter last year -- along with virtually flat iPad sales of 14.1 million this quarter, up from 14 million last year. During the same period, arch-rival Samsung, which just reported its earnings last Thursday, sold 86 million smartphones, though Samsung's lineup has far more models than Apple's, including entry-level versions that don't compete directly with the iPhone. Samsung is facing its own challenges at the top of its range, and sold just 16 million of its flagship Galaxy S4 during the period, according to estimates. Apple continued to lead the tablet market, selling 14.1 million iPads in the quarter, compared to Samsung's 10.5 million -- though Samsung's tablet sales doubled from last year.

Apple earned $7.5 billion, on revenue of $37.5 billion. The quarterly earnings didn't include the iPad mini with Retina display or iPad Air, which were announced last week, and only included one week's worth of sales for the latest iPhones, the 5c and 5s, which Apple previously stated sold 9 million units during their first three days on the market. Apple is expected to provide some projections about sales for the new models in its quarterly earnings call, scheduled for later today.

"We're pleased to report a strong finish to an amazing year with record fourth quarter revenue, including sales of almost 34 million iPhones," said Tim Cook, Apple's CEO. "We're excited to go into the holidays with our new iPhone 5c and iPhone 5s, iOS 7, the new iPad mini with Retina Display and the incredibly thin and light iPad Air, new MacBook Pros, the radical new Mac Pro, OS X Mavericks and the next generation iWork and iLife apps for OS X and iOS."

Source: Apple
In this article: apple, earnings, ipad, IpadMini, Iphone5, Iphone5c, Iphone5s, mobilepostcross
All products recommended by Engadget are selected by our editorial team, independent of our parent company. Some of our stories include affiliate links. If you buy something through one of these links, we may earn an affiliate commission.