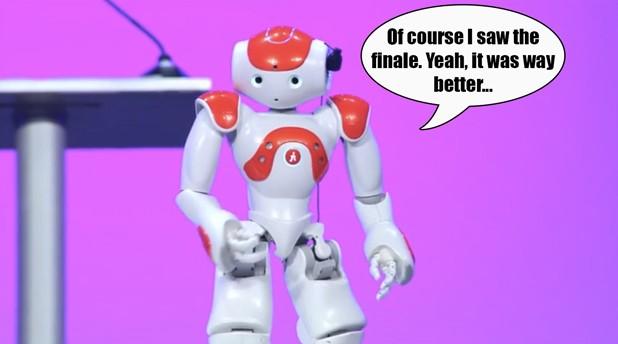 You may remember Nao, a charming humanoid robot, for its exploits on the soccer field, dance floor, or even for its love of amateur dramatics. While Nao has enjoyed chatting with us humans since its maker Aldebaran Robotics added Nuance's speech recognition wizardry in 2011, the pair have today reaffirmed their desire to turn the droid into a true conversationalist. Upgraded cloud-based tech from Nuance will apparently "allow people to have truly natural conversations with the robot" in 19 different languages when the new models become available early next year. Furthermore, Nao has a fresh, distinct voice intended to better represent its "personality" -- one that's programmed never to tire of your trivial discussions. A demo of these new features can be seen below, although Nao mostly lets folks from Nuance and Aldebaran take the floor to talk of the partnership and the future of robot interaction. Not before it busts out some new moves, however.

NAO is Aldebaran's successful, fully-programmable and interactive humanoid robot equipped with state-of-the-art motion, vision, tactile and audio capabilities. NAO can walk on different surfaces, track and recognize faces and objects, express and understand emotions, and react to touch and interact by voice. In fact, NAO has integrated Nuance's embedded voice recognition technology to accurately hear and respond to his interlocutor's voice, since 2011.

Aldebaran will now take advantage of Nuance's cloud-based voice recognition and expressive text-to-speech through Nuance's NDEV developer program. Combined, these technologies allow people to have truly natural conversations with the robot, in nineteen different languages. Further, NAO robots will become even further personalized through a custom text-to-speech voice that was specifically developed to match the robot's personality. As a result, Aldebaran will be able to create even more interaction possibilities for future generations of robots, and better develop how they will interact and engage in various settings, including education and special education environments with autistic children, and personal robotics. NAO robots featuring Nuance's Natural Language Understanding and text-to-speech will ship in early 2014.

"Developing natural, conversational interactions with humanoid robots is a challenging and pioneering area of robotics. Our robots have to express and understand emotions and for this, there needs to be expression in their voice that speaks to their personality, and matches their body language," said Bruno Maisonnier, CEO and founder of Aldebaran Robotics at a recent Nuance event. "Nuance and Aldebaran have combined our voice and robotics innovations to showcase what's possible for human-robot communication. Our vision is to create even more intuitive and human-like interactions between man and machine as part of the NAO experience, in turn creating a wealth of new application opportunities for NAO and the next generation of robotic companions."

"Nuance's conversational voice innovations have changed the way people engage their devices, consumer electronics, cars and a variety of applications – and now we're changing the way people can communicate with the world's most sophisticated humanoid robots," said Steve Chambers, president, sales and marketing, and executive vice president, Nuance. "By working with Aldebaran, we're creating unique and compelling possibilities in the space of robotics where people can connect with NAO as if they were connecting with another human being – and that's simply powerful."

In this article: aldebaran, AldebaranRobotics, humanoid, humanoidrobot, nao, NaoRobot, nuance, robot, video, VoiceRecognition
All products recommended by Engadget are selected by our editorial team, independent of our parent company. Some of our stories include affiliate links. If you buy something through one of these links, we may earn an affiliate commission.