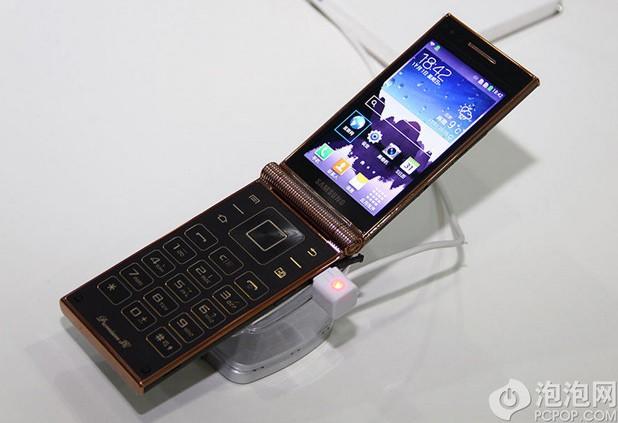 China Telecom's obsession with Samsung's luxury clamshells isn't dwindling any time soon. In fact, the two companies have just launched a new model, the SCH-W2014, at their annual "Heart Of The World" charity concert in Nanjing last night. While it shares a similar appearance with the W2013 and the more recent Galaxy Golden, the new W2014 is by far the most powerful dual-screen flip phone in Samsung's line-up, featuring Android 4.3, a 2.3GHz quad-core Snapdragon 800 SoC, 2GB of RAM, a 13-megapixel main camera, a 2-megapixel front-facing imager and dual-SIM connectivity (CDMA2000 800/1900 and GSM 900/1800/1900). You'll also find 32GB of internal storage plus microSD expansion.

Compared to the Galaxy Golden and the W2013, the only notable downsides on the W2014 are the same 800 x 480 resolution on its 3.7-inch Super AMOLED displays, as well as its similar 1,900mAh battery capacity (but removable). On the flip side, the weight has gone down to 173.5g, making this the lightest model in the "Heart Of The World" clamshell family since the W699 -- the first of the series -- from 2008. Chinese website iFeng, which got to check out the device at the event, praised the phone's overall design and keypad feedback, but also criticized the plastic look and feel of the hinge.

There's no launch date or price just yet, but expect the W2014 to cost beyond CN¥10,000, which works out to be about US$1,640. Yes, it's certainly not everyone's cup of tea, but you can still head over to PCPOP for more hands-on photos.

In this article: android, china, chinatelecom, flipphone, heartoftheworld, mobilepostcross, phone, samsung, sch-w2014, snapdragon800, w2014
All products recommended by Engadget are selected by our editorial team, independent of our parent company. Some of our stories include affiliate links. If you buy something through one of these links, we may earn an affiliate commission.