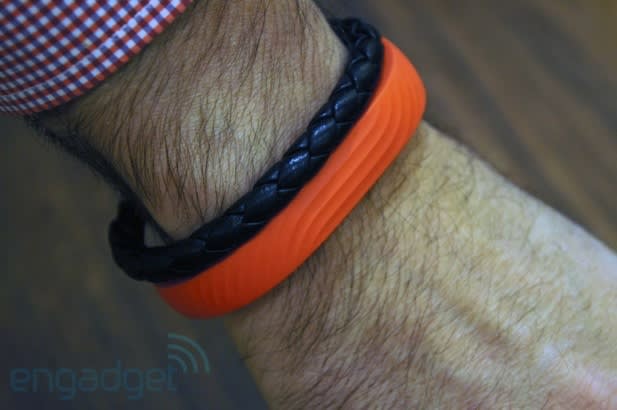 It took Jawbone two tries to release a fitness tracker that didn't break after several days of use. And it took the company three generations to release one that could sync users' sleep and activity data without having to be plugged in. Today, about two years after the first Up band went on sale, the company is introducing the Up24, its first fitness tracker that syncs wirelessly. Aside from the fact that this makes for a potentially more convenient experience, this is interesting because Jawbone used to be stubbornly against wireless syncing. Specifically, the company once said that it didn't want to use Bluetooth in the Up band because it would necessitate chunkier hardware, put a dent in battery life and generally complicate the user experience. Well, here we have the Up24, which promises seven days of use, thanks to the Bluetooth Low Energy radio inside (that's the same power-efficient standard used in other new fitness trackers). The Up24 is also roughly the same size as the current Up band, and just as water-resistant, too.

In addition, Jawbone just released version 3.0 of its iOS app, which includes some features that will only work on the new Up24 (think: live notifications letting you know you're about to meet your fitness goals). Also, because the Up24 works over Bluetooth, you can set a vibrating "Smart Alarm" using the app, instead of having to take the band off and plug it into your phone. Fortunately, the app is mostly compatible with the old Up band. Most important of all, perhaps, is a new sleep recovery tool that allows you to estimate how much sleep you got, even if you forgot to put the band into sleep mode.

Other new features include a detailed activity log that breaks down your sleep, activity and food data (you still need to record your food intake manually using the app's built-in food diary). "Today I Will" allows you to opt into to daily challenges like walking farther, or consuming more water. The app also includes some new motivational features called "Streaks" and "Milestones" which are, well, exactly what they sound like. "Streaks" acts as sort of a cheerleader every time you do something like meet your walking goal for a week straight. You won't get a milestone, though, until you rack up, say, 1 million steps.

We expect to have a full review of the Up24 up on Engadget soon, but you can order one today for $150 (last year's model is still available and priced at $130). Even if you don't plan on upgrading, we've included a gallery of screenshots above so that you can get a peek at the new app.

In this article: FitnessTracker, jawbone, jawboneup, jawboneup24
All products recommended by Engadget are selected by our editorial team, independent of our parent company. Some of our stories include affiliate links. If you buy something through one of these links, we may earn an affiliate commission.