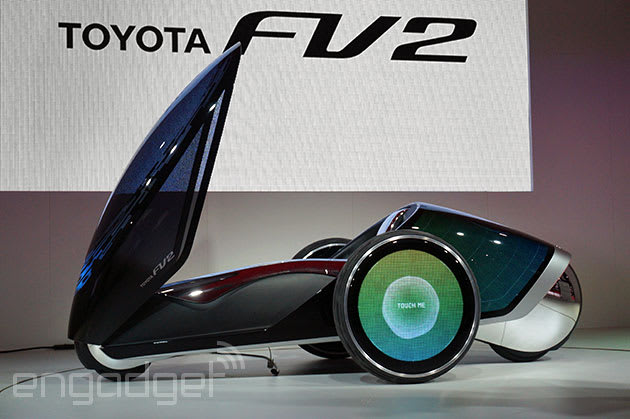 Toyota's new one-person EV even managed to draw our attention away from cars that look fit for superheroics, Announced at the Tokyo Motor Show 2013, the FV2 concept practically slaps you around the face with how much future...ness it's been plied with. In its 'parked' state (measuring 90cm high), it looks a lot like a Tron cycle also-ran, but once the door / roof is raised [seen above], this all changes. Once that happens, you can steer (pilot?) the FV2 while standing: by shifting your body weight to the left or right, it'll tend in that direction. The vehicle only carries one, but distributes the weight across four wheels, which are arranged in a cross layout. There's one at the front, one at the back and two primary drive wheels underneath the driver. This pair, alongside the tail section of the FV2, are coated in light-up displays, able to cycle through colors and patterns, although we're not entirely clear what degree of customization you'd get if the concept eventually made it to retail. We know some people's tastes are pretty out there.

Accompanying the vehicle, there were several touchscreen displays that allowed you to... cycle through some custom paint jobs. That's not where the technology ends, however, as that raised windscreen will reportedly act as a augmented reality display, offering up driving advice on traffic conditions, soccer scores and the weather. A spokesperson told Engadget that this information could be gleaned from surrounding vehicles and other wireless data points -- well, we're talking about the future, remember? For a closer glimpse at what Toyota thinks the mirai will look like, take a look through the galleries below.

9
In this article: concept, fv2, hands-on, tokyomotorshow, tokyomotorshow2013, toyota
All products recommended by Engadget are selected by our editorial team, independent of our parent company. Some of our stories include affiliate links. If you buy something through one of these links, we may earn an affiliate commission.