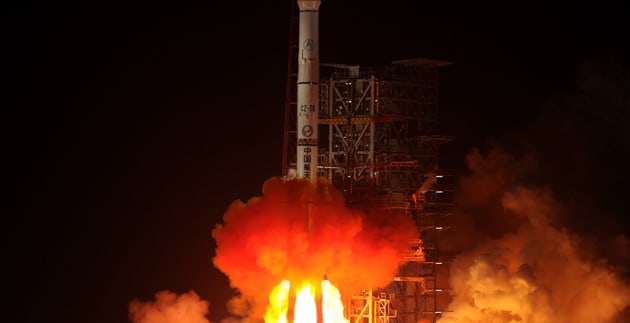 China began stage one of its Chang'e 3 mission yesterday afternoon by launching a Long March 3B rocket toward the troposphere, destined for the moon. The Jade Rabbit, a robotic rover, managed to hop along for the ride with intentions of roaming our rocky satellite's surfaces. Lunar touchdown is scheduled for December 14th, which marks the first time a craft will settle down on the ole' ball of cheese since the Soviet's Luna 24 mission in 1976. Between Virgin Galactic and the Google-backed Lunar X Prize competition, traveling throughout the universe may finally be less of a science fiction fantasy and more of an everyday reality -- one that China isn't ignoring. According to the deputy engineer-in-chief in charge of the second phase of China's lunar program, Sun Huixian, "China's space exploration will not stop at the moon... Our target is deep space."

Source: NewScientist, Bloomberg
In this article: china, chinese rocket, google, jaderabbit, lunar exploration, lunar x, lunar x prize, moon, space, space travel, virgin galactic
All products recommended by Engadget are selected by our editorial team, independent of our parent company. Some of our stories include affiliate links. If you buy something through one of these links, we may earn an affiliate commission.