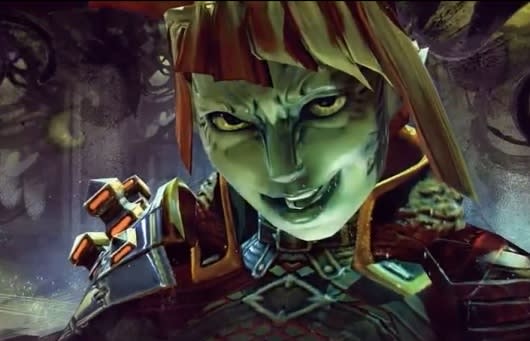 Scarlet Briar has a lot of enemies. She's set up a little empire at the top of Guild Wars 2's hated character list, roasting marshmallows on the thousands of critical forum posts she's inspired. ArenaNet already has the living story's current arc planned out, but that hasn't stopped a number of forum posters from demanding an immediate stop to Scarlet's involvement and a complete retcon of the character. I think that's a silly thing to ask for, and I don't believe anyone would be pleased with the results if it happened, but disliking her is valid enough.

Wintersday will be the last GW2 content release of 2013, and it's been confirmed that Scarlet won't be putting in an appearance to ruin the holiday. To borrow ArenaNet's TV show metaphor, I'd say it feels as if the last few living story updates were sort of the season finale, so I think it's a good time to look back at our controversial primary antagonist and her role in the story.

Scarlet put in her first appearance during the Queen's Jubilee release, although Mai Trin previously mentioned her by name in the Aetherblade Retreat dungeon. Her actual reveal happened during the Clockwork Chaos release, when we learned about her backstory, her modus operandi, and her personality. She's responsible for most of the events in the living story reaching back to Flame and Frost, although she doesn't appear to have had anything to do with Southsun or the Consortium, and her influence on the Zephyr Sanctum went only as far as the occasional Aetherblade attack. Whether or not she had anything to do with Tequatl's sudden power surge is currently unknown. She doesn't appear to be interested in Moto's Super Adventure Box.

Personality-wise, she's reminiscent of the Joker. Scarlet is violent, sadistic, and utterly ruthless, but she maintains a goofily unbalanced persona that makes her appear to be operating at random, wherever and whenever the mood for her particular murderous brand of "fun" strikes. However, we've gotten lots of clues that she's actually a meticulous planner, and the writing team has done a good job of showing Scarlet incorporating the fruits of her experiments and heists into subsequent attacks.

Scarlet's PR problems started right out of the gate. Her basic character premise -- that she's a genius Sylvari who graduated from all three Asuran colleges and worked with the Inquest before supposedly viewing the Eternal Alchemy itself -- requires a hefty amount of suspension of disbelief on the part of the audience. Canon characters are allowed to get away with a lot more, but if she were a roleplaying character, I'd gently suggest a few parings-down at the drawing board. A common beginner's mistake when creating RP characters in an existing canon is to try to make them unique and interesting by taking them entirely out of their race's standard element and transplanting them wholly into another or to take all of the tropes a race is known for and reverse them. This usually results in a character who lacks grounding or prompts the question of why the player didn't just roll a character of the race he's borrowing so heavily from in the first place.

Despite being a canon character, Scarlet seems to suffer from this. The idea of a character who simply disregards rules she dislikes is potentially interesting, but Scarlet ditches her people without a backward glance, and after making a few brief stops to learn from other races, she gets tied up in the Asuran storyline. Sylvari are known for inquisitiveness, but while Scarlet typifies that she disdains most of their other values: Where Sylvari are generally considered empathetic, Scarlet is detached and sadistic; where Sylvari are known for their strong sense of community, Scarlet throws away all of her potential emotional connections. Any one of those things could be an interesting hook for a Sylvari character; the Nightmare Court subverts Sylvari morality, and the Soundless subvert the common connection to the Dream. However, departure from Sylvari culture represents a major conflict for an individual character. Courtiers are corrupted and twisted but still deeply connected to the Dream and to the Sylvari as a whole. The Soundless have to work hard to remove themselves from the Dream, and it forces them into self-imposed exile where they lose their cultural social net and have to build one for themselves. 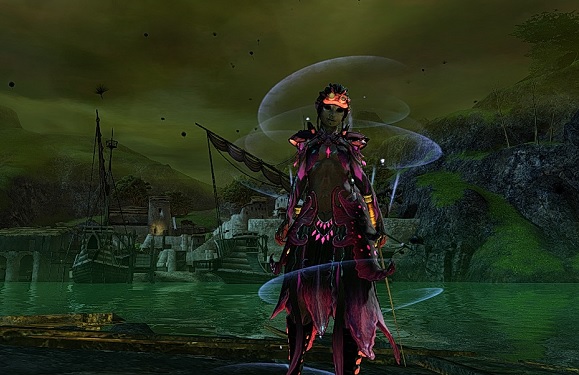 Scarlet tosses her cultural grounding without it creating much of a conflict for her at all. She apparently lost the voice of the Pale Tree without even trying, and when she hears it again she dismisses her pleas as more of an annoyance than anything. Scarlet neatly avoids the major conflict of the Sylvari by concluding that the Dreamers and Nightmare Court both suck, and she views the scope of their lives as small and petty; this doesn't exactly come off well since the entirety of the Sylvari personal story is spent showing how important and rich those lives are. For Scarlet to simply walk away from that -- villain or not -- cheapens the impact a bit.

Why is she a Sylvari? It might be solely because she needs to reveal something important about her race, but apart from that it seems like ArenaNet missed an opportunity by not making her an Asura. Most of her background wouldn't have had to consist of explaining why she's adrift because she'd fit in naturally. The great sticking point of her having attended and excelled at all three of Rata Sum's colleges would make sense for an Asuran supervillain. Nearly everything about her premise would have been easier to swallow.

Because her concept requires acceptance of a lot of unusual conditions from the outset, Scarlet's exploits invite greater levels of critical examination than they otherwise might, and inconsistencies start to grate and become harder to overlook. It's difficult to imagine this insular, sharp-tongued character who derives so much glee from frustrating other people and keeps her power through threats of violence somehow sweet-talking disparate groups of dangerous enemies into buying into her plans. Being "silver-tongued" is an informed trait; we don't ever actually see Scarlet affect even the ghost of a charming persona for more than a few seconds before she starts giggling over mass murder again. Where is she getting a near-limitless supply of Aetherblades from? For that matter, how the heck did Kryta fund the creation of thousands of watchknights? Plot holes and handwaving stick out the more they add up.

We also never really see Scarlet's allies question her until after the fact. She's openly disdainful of them and threatens them, calling them her minions and treating them as disposable. They keep joining up despite none of her plans to this point succeeding to any great degree; in fact, it's looking more and more as though she's just collecting what she needs from each encounter and then deliberately leaving a mess for both the heroes and her supposed allies to clean up. Scarlet offers her factions things they want, but so far none of them has tried to double-cross her, challenge her methods, or demand more. This makes them look badly informed and short-sighted, which wouldn't be a big deal if they weren't mostly established villains whose importance and danger quotient now pale in comparison to Scarlet.
What is Scarlet?
There's a lot we don't know about Scarlet still, and the writers at ArenaNet are definitely improving the storytelling portion of the living world and making adjustments as they go. I think we've reached a point at which some of the larger fandom discussion of her has gotten hyperbolic and gross -- calling her the worst villain ever written and saying that people deserve to lose their jobs over her is ridiculous, full stop. The same thing happened with Kormir, Trahearne, and to a lesser extent, Logan, Jennah, and Kiel; while all of those characters have some legitimate flaws in their writing or presentation, exaggeration of how horrible they are eventually starts to be a recipe for nods and back pats regardless of how accurate or thoughtful the criticism is. That makes it hard to have a real discussion about them or to provide good feedback to the writers.

Many of the things I've discussed here have already been addressed by Bobby Stein, both in and out of the collaborative development initiative threads. Despite my criticism of Scarlet, I'm interested in where her story will end up and what her endgame goal is. People flipped their lids when she turned up in the Thaumanova Reactor Fractal, which is odd because her presence there makes perfect sense. ArenaNet has gotten repeated requests to go back to the Elder Dragons, and here we have Scarlet talking about dragon energy and ley lines. When we finally know what Scarlet saw, what implications will that have for Tyria? I'm still dying to know. 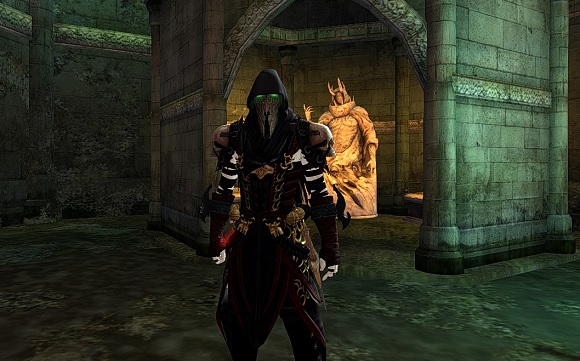 Grenth is the reason for the season

Speaking of dying, the Season of the Colossus is upon us. It's a time of somber reflection; in these short daylight hours we offer our prayers to Grenth and symbolically shun the coming of spring. The servants of the Prince of Winter will gather to play our role in the ancient struggle between death and life, and as the followers of Dwayna preach of hope and comfort, we are there to remind the living that all of us must someday--

Well, have you been good this year? Got your wish list all ready for Toymaker Whatsisface? Gonna go jump on some peppermint wheels? Tell us all about it in the comments, and I'll see you in Lion's Arch for the celebrations -- if I must.

Anatoli Ingram suffers from severe altitis, Necromancitosis, and Guild Wars 2 addiction. The only known treatment is writing Massively's weekly Flameseeker Chronicles column, which is published every Tuesday. His conditions are contagious, so contact him safely at anatoli@massively.com. Equip cleansing skills -- just in case.
In this article: anet, arenanet, buy-to-play, criticism, fantasy, featured, flameseeker-chronicles, guild-wars, guild-wars-2, gw, gw1, gw2, hail-grenth, living-story, living-world, lore, ncsoft, opinion, roleplaying, scarlet-briar, sylvari
All products recommended by Engadget are selected by our editorial team, independent of our parent company. Some of our stories include affiliate links. If you buy something through one of these links, we may earn an affiliate commission.