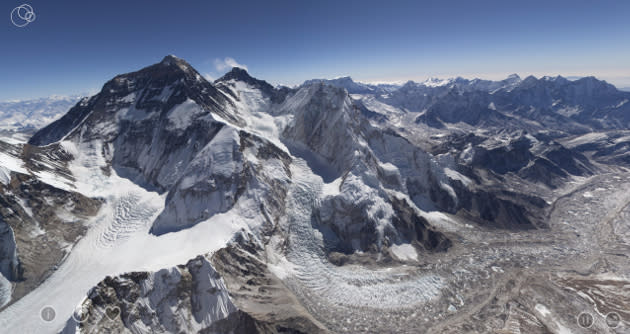 Microsoft's Photosynth software has its fair share of fans. The high-tech panorama capture has always excelled at stitching together stunning images. The latest beta update brings a host of enhancements to the table that ensure Redmond wont be eclipsed by its competitors in short order. For one, the new Spin Photosynth allows you to walk around an object, snapping pictures that are then pieced together in a 360-degree 3D model. The servers doing all the heavy lifting are even able to identify moving objects, such as the birds in the spin around Haystack Rock after the break, and smooths the transition between pictures. Microsoft has also added support for ultra high-resolution imagery. In the second example after the break, a flight to Everest, you're able to glide your way through the Himalayas. Each full-size frame is a stunning 60 megapixels, which allows you to zoom in and view the glaciers and rocky crags in stunning detail.

If you're interested in checking out the new features before they hit prime time, you can sign up for the technical preview here. But, be warned, it's on a first come first serve basis, so there's no guarantee you'll get into the program.

In this article: microsoft, panorama, photosynth, TechnicalPreview
All products recommended by Engadget are selected by our editorial team, independent of our parent company. Some of our stories include affiliate links. If you buy something through one of these links, we may earn an affiliate commission.