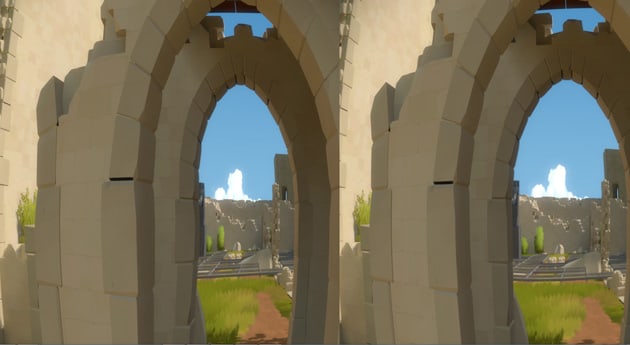 After indie game darling Braid's mass popularity, creator Jonathan Blow didn't go crazy and buy a Lamborghini or something. He started a game studio instead, to create his next big thing: The Witness. Blow was on-stage at Sony's big PlayStation 4 announcement event back in February (that was this year!), where he announced The Witness as headed to the PlayStation 4 as a "console exclusive" -- a coup for Sony's PlayStation 4 after Braid initially debuted exclusively on Microsoft's Xbox 360 in 2008.

Since that announcement, Blow's been in development mode. The Witness was featured at Sony's PlayStation 4 review event, as well as trade shows like E3 and Gamescom, but he and his team have otherwise been pretty quiet. A few weeks ago, however, Blow posted a duo of enticing images (one of which is seen above) with the headline, "What could it mean??" The internet answered with the logical response: "Jonathan Blow possibly teasing Oculus [Rift] support for The Witness. This game seems like a perfect fit." is Reddit's headline. Surprising no one, The Witness -- at least the PC version -- will support the Oculus Rift.

"The main work we are doing is not for the Oculus," Blow told Engadget. "But then, since we are doing 3D it is not that big a step to support the Oculus also, so we are implementing support for it." In other news, apparently The Witness will support 3D televisions! It's not clear how the headset will interact with the game in terms of gameplay input, but we're thrilled enough by the thought of exploring The Witness' first-person open-world using the Oculus Rift. And hey, maybe there'll be a consumer version in sight by the time The Witness launches in 2014!

Coverage: The Witness, Reddit
In this article: 3d, hdpostcross, interview, jonathanblow, oculus, oculusrift, playstation4, ps4, sony, thewitness
All products recommended by Engadget are selected by our editorial team, independent of our parent company. Some of our stories include affiliate links. If you buy something through one of these links, we may earn an affiliate commission.