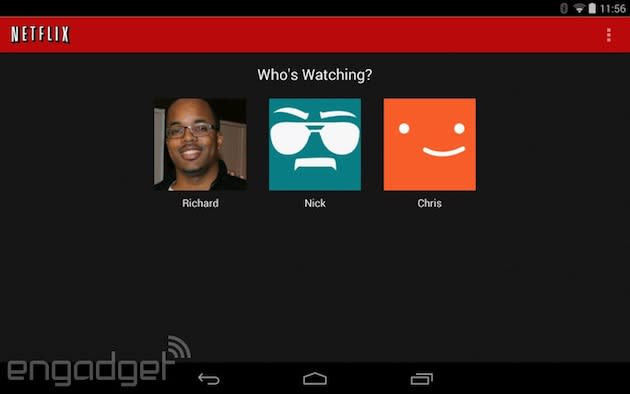 Netflix rolled out support for multiple individual streaming profiles within a single account a few months ago, but until now its Android app has been among the platforms that still didn't recognize them. The new version 3.1.0 update rolling out tonight changes that, finally letting people filter out queues and suggestions from others using the same account like family members, significant others or annoying roommates. In our use it doesn't pop up the profile switcher by default, but it's accessible after selecting the current profile under the slide-out menu from the left (shown after the break). According to the changelog this new version also brings an enhanced search, with support for people and related titles. The latest version of the app should be available on Google Play now, but you'll still have to hit YouTube for the latest House of Cards trailer.

Update: A post on Google+ points out that the new Android app also implements the Restricted Profiles feature from Jelly Bean. That means you can disable profile switching from the owner's profile, useful for keeping kids locked to their age-appropriate content (especially when streaming to the TV via Chromecast, for example) and not mucking up your carefully selected Being Human (UK) with Being Human (US). In this article: android, hdpostcross, mobilepostcross, netflix, profiles, search, update
All products recommended by Engadget are selected by our editorial team, independent of our parent company. Some of our stories include affiliate links. If you buy something through one of these links, we may earn an affiliate commission.