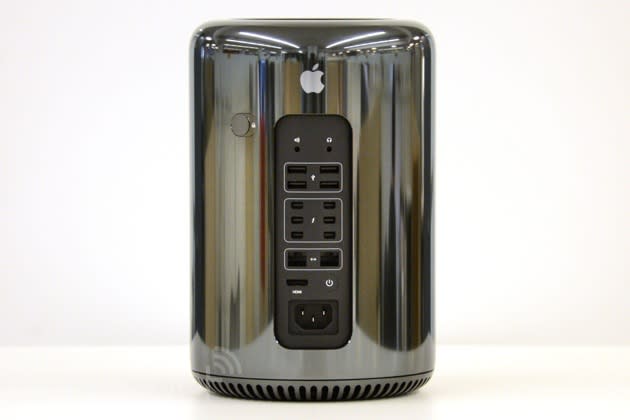 We know, we know: everyone who's seen it says it looks like a trashcan. But surely there's something else to say about Apple's new Mac Pro workstation, right? The thing is, until now, any tech blogger who's spent any time with it has had to take photos through a glass case (read: they didn't really spend any time with it). Finally, though, the Mac Pro is on sale, and we've just come home with a review unit, meaning we've finally had the chance to lay our hands on it. In person, it somehow feels smaller and shorter than I imagined, at 9.9 inches tall. Either way, it should take up minimal space if you're working on location -- and yes, given that it's only 11 pounds, you could certainly schlep it around if needed.

Aesthetically, the anondized aluminum is more reflective than any of Apple's other products, which also means it's more fingerprint-prone. (Not necessarily an issue if you plan on having it tucked away, though you'll definitely notice it if you engage in some of that aforementioned schlepping.) It also looks less black than it does on Apple's site -- more like the "Space Gray" that it actually is. As it happens, that case is easy to unlock and slip off, on the rare occasion that you want to replace the RAM, storage or one of the GPUs. Hopefully, of course, you won't need to do this often. And besides, the machine won't actually turn on unless you have the case locked in, so keeping the lid off indefinitely simply isn't an option. Even with the lid on, though, the four USB 3.0 ports, six Thunderbolt 2 sockets, HDMI port and dual Ethernet jacks are easy to access, thanks to a cut-out in the aluminum enclosure.

And what of performance? Well, we'd hardly be doing the machine justice if we did a deep dive now, but rest assured we'll be putting the Pro through its paces over the coming days, with a full review to follow soon. Suffice to say, we've already seen it play back 16 simultaneous 4K streams in the new version of Final Cut Pro, with zero waiting time as effects were applied to the original footage. Stay tuned for much more on that front and for now, enjoy some (honest-to-goodness) hands-on photos above.

In this article: apple, applemacpro, hands-on, macpro, macpro2013
All products recommended by Engadget are selected by our editorial team, independent of our parent company. Some of our stories include affiliate links. If you buy something through one of these links, we may earn an affiliate commission.