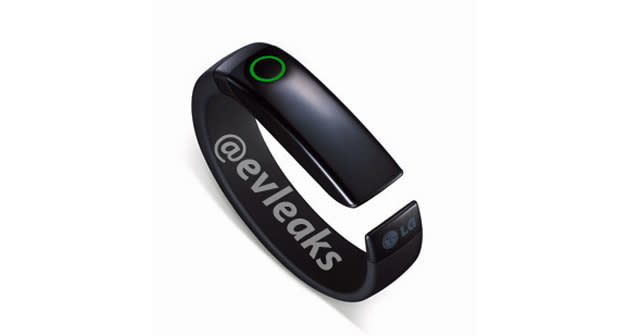 We love it when a leak and a rumor come together. LG's Lifeband Touch (as claimed by @evleaks), pictured above, is most likely the wearable that was hinted at just last week. The fitness band is likely an evolution of that which we saw back at CES, and at a guess, we might see again in the next week or so (unless we're made to wait until MWC). The name -- and image -- suggest a touchscreen component making this a swipe-friendly FuelBand competitor. Whether it'll be an LG G2 companion (as rumored) or a standalone device is yet to be known (we're hoping maybe a bit of both). Unless LG has had a change of heart, it's also likely to include an altimeter, some mobile notification features and play nice with the firm's Smart TV fitness/dance apps. What certainly is clear, however, is that there's going to be even more competition for your wrist in 2014.

In this article: fitness tracker, lg, lifeband touch, wearable
All products recommended by Engadget are selected by our editorial team, independent of our parent company. Some of our stories include affiliate links. If you buy something through one of these links, we may earn an affiliate commission.