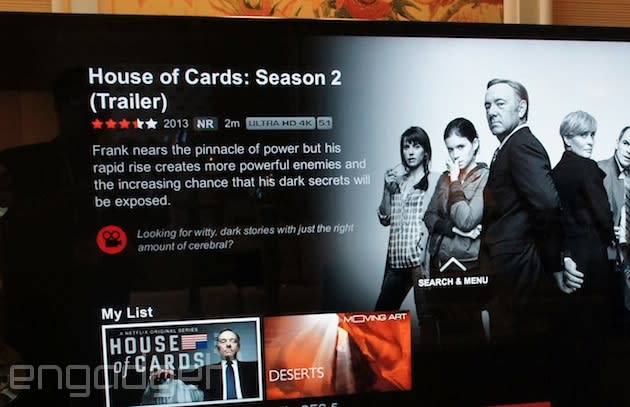 Earlier today Netflix CEO Reed Hastings jumped into LG's press conference to confirm that his company will offer the second season of House of Cards in 4K, streamed directly to Ultra HD TVs from LG and others. Naturally then, we stopped by Netflix's Las Vegas hotel suite to check out the latest offerings and got an early preview. While Samsung showed off a demo of 4K Netflix last year, that video stream wasn't really live from the internet so this is our first true taste of Ultra HD content. Obviously it's a demonstration under controlled settings and non-final hardware, but watching the House of Cards season two trailer and a documentary clip came through impressively sharp.

According to spokesperson Joris Evers, at first the super high-res streams will only be available via embedded Ultra HD TV apps since most devices aren't ready to decode h.265 HEVC compressed video yet. The demo we saw was actually running through a dedicated decoder, with two separate 4K video profiles set at about 11Mbps and 15Mbps (check after the break for a grab, not meant for quality comparison but to show the bitrate) that both seemed a clear upgrade over current 1080p feeds. We still don't know exactly when the Ultra HD video will be available, but that may depend on how quickly the next generation of TVs with support for the format hit the streets. Netflix has said it wants to be known as the place to go for 4K content and it appears to be well on its way -- assuming you have a healthy broadband connection, of course. In this article: 4k, hdpostcross, houseofcards, netflix, ultrahd
All products recommended by Engadget are selected by our editorial team, independent of our parent company. Some of our stories include affiliate links. If you buy something through one of these links, we may earn an affiliate commission.