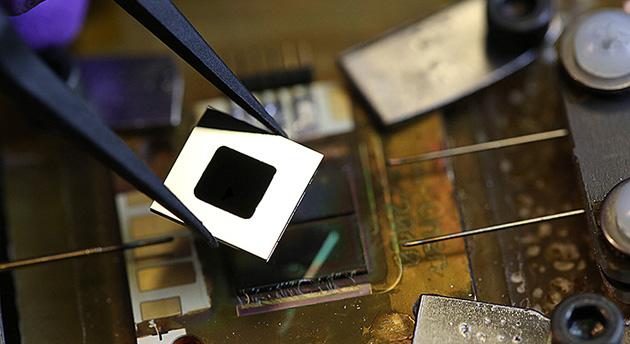 It's tough to build solar cells that capture both heat and light -- most of these multi-talented devices can't trap more than one percent of the energy they receive. However, MIT has just blown past that limitation with a prototype chip that absorbs warmth through an outer layer of carbon nanotubes. The tubing heats up photonic crystals so much that they glow with an intense light, giving an attached solar cell more energy than it would collect through sunlight alone. The technology is already efficient enough to extract 3.2 percent of the energy it gets, and MIT believes that it could reach 20 percent with more development. While that's not necessarily more effective than conventional technology, it's much easier to store heat than electricity; a future nanotube-based panel could provide a lot more on-demand energy than we typically get today. There's no estimate for when a finished product might reach the market, but it might not be long before solar panels have plenty of reserve power.

In this article: carbon, heat, mit, nanotube, photovoltaic, science, solar, SolarCell, solarpower, thermophotovoltaics, video
All products recommended by Engadget are selected by our editorial team, independent of our parent company. Some of our stories include affiliate links. If you buy something through one of these links, we may earn an affiliate commission.