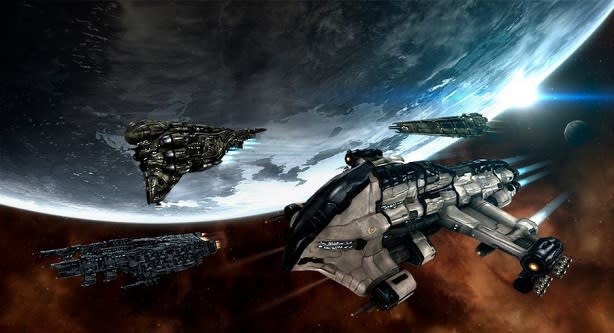 The Freebie Gamer Bundle leads today's Joystiq Deals, offering eight games for the low price of totally free. Every game in the bundle is Mac-compatible and five work on PC. Discounted until Saturday, May 10, the eight games in question are Brickshooter Egypt, Atlantis Quest, Otto Matic, Nanosaur 2: Hatchling, BigHead Bash, Crazy Fairies, Akaneiro: Demon Hunters and Gears. Some of the games in this bundle are normally free, but now include exclusive upgrades that would normally require in-game purchases to unlock.

Lastly, EVE Online is celebrating "Fanfest" this week on Steam with deals on subscription packages and starter packs. Starter Packs are currently 75 percent off ($4.98) and subscriptions are upwards of 27 percent off; three-month plans are 13 percent off ($12.95 per month), six-month plans are 20 percent off ($11.95 per month) and year-long subscriptions are down to $10.95 per month. The EVE Online deals are good until Wednesday, May 7.
[Image: CCP]
In this article: eve-online, free, freebie-gamer-bundle, joystiq-deals, mac, pc
All products recommended by Engadget are selected by our editorial team, independent of our parent company. Some of our stories include affiliate links. If you buy something through one of these links, we may earn an affiliate commission.