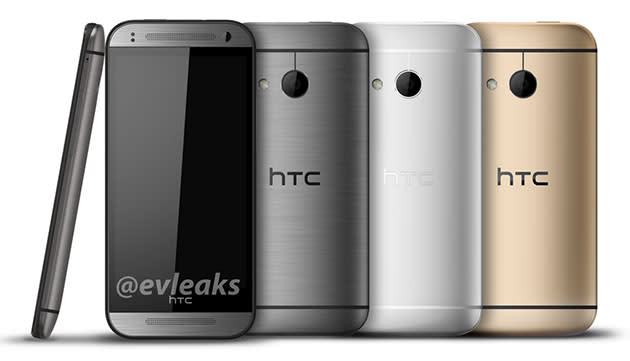 When a Swedish carrier leaked the existence of an HTC One Mini 2, we weren't exactly shocked, given the timing of the original One Mini's arrival. We now have alleged pictures of said device courtesy of @evleaks and it fails to surprise in appearance either, looking nearly like its bigger sibling. However, judging by the render, the One Mini 2 (yes, that's apparently the name) lacks the HTC One M8's depth-sensing Duo Camera -- meaning it'll lack selective focus and other fancy effects. While there are three color choices (white, gray and champagne), no other features or specs are mentioned. However, prior leaks suggest a 4.5-inch, 720p screen, microSD slot and quad-core Snapdragon 400 CPU. Oddly, this image leak doesn't line up with another supposed press render from a few days ago, so we'd counsel skepticism until it's officially launched.

In this article: htc, HTCOneMini2, mobilepostcross
All products recommended by Engadget are selected by our editorial team, independent of our parent company. Some of our stories include affiliate links. If you buy something through one of these links, we may earn an affiliate commission.