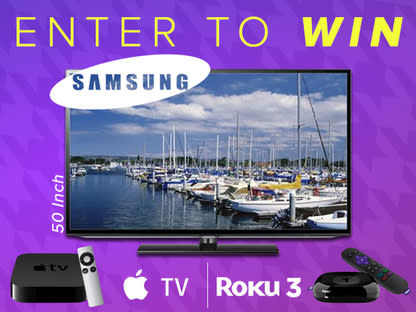 Joystiq Deals does more than save you money -- it also gives you free stuff. Starting this week, we're giving you the chance to win a free 50-inch, 1080p Samsung HDTV, complete with your choice of a free Roku 3 Media Player or Apple TV. A winner will be chosen on May 31, so enter today for a chance to win the entertainment setup of your dreams!

Over on Steam, meanwhile, developer Bohemia Interactive is hosting a catalog-wide sale to commemorate its 15th anniversary. This weekend, Steam members can pick up Arma 3 for $35.99, DayZ for $25.49, and the Take on Helicopters Bundle for $4.99, among many other games on offer.

If you'd rather buy up Bohemia's entire catalog at once, the 26-game Bohemia Interactive Bundle is up for grabs at $99.99. Bohemia's sale prices remain in effect through May 19.
In this article: bohemia-interactive, contest, joystiq-deals, pc
All products recommended by Engadget are selected by our editorial team, independent of our parent company. Some of our stories include affiliate links. If you buy something through one of these links, we may earn an affiliate commission.