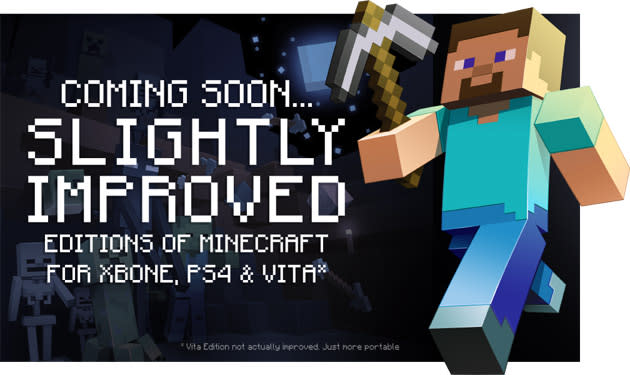 Look, playing Minecraft on a console is really great. It's basically the same delightful/terrifying experience from PC, albeit in the comfort of your living room. What's not to like? Well, on last-gen consoles, there was at least one unfortunate side effect of the platform: the procedurally generated world of Minecraft was significantly smaller than what could be done on PC. With Xbox One and PlayStation 4 versions arriving this August, that changes. As development studio Mojang puts it, "It brings significantly bigger worlds and a greater draw distance than Xbox 360 Edition." Hot dog!

Of course, should the more bite-sized world of last-gen Minecraft suffice (and believe us, it's plenty big), the PlayStation Vita version also arrives this August. Here's even better news: if you already bought the game on PlayStation 3, you own it on Vita. A similar deal applies to folks converting from PS3/Xbox 360 versions to PS4/XB1 versions: if you already own the prior version and you want to upgrade to current-gen, it's just $5. The latter deal only applies for the first year of availability, so you'll wanna upgrade soon-ish to snag it on the cheap.

To sweeten the deal even further, saved games from last-gen/Vita will scale up to current-gen consoles (though it's not possible to go back -- beware!). All the updates to last-gen versions will come packed in to this August's version, and the whole package goes for $20. Oh, and the creepers are still super, super creepy.

In this article: hdpostcross, microsoft, minecraft, mojang, playstation3, playstation4, playstationvita, ps3, ps4, psvita, sony, vita, xboxone
All products recommended by Engadget are selected by our editorial team, independent of our parent company. Some of our stories include affiliate links. If you buy something through one of these links, we may earn an affiliate commission.