A return to American-made TVs, by way of the bathroom 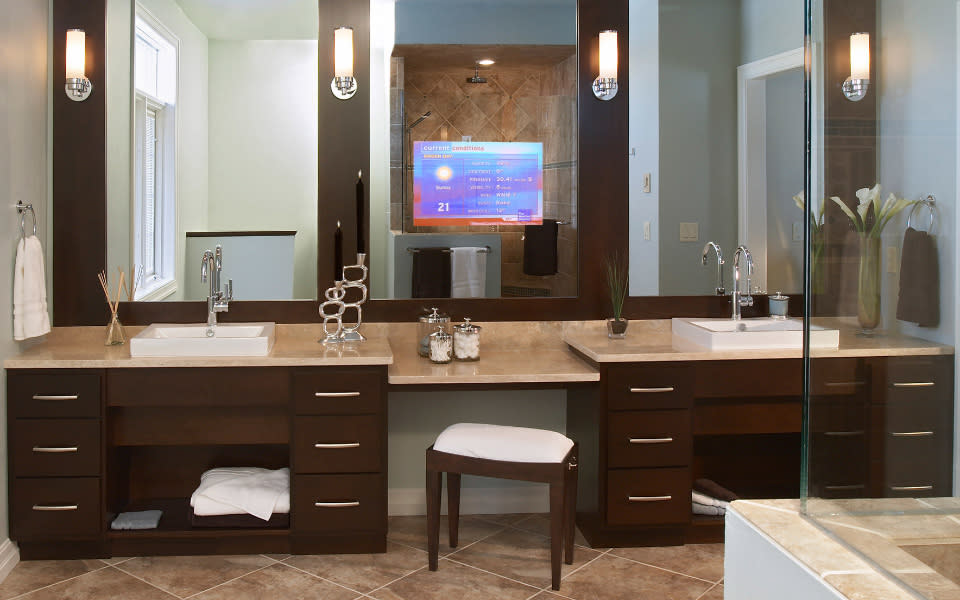 It's a story we've heard from Apple, Google and Amazon. From humble beginnings, those companies grew into global giants. But countless other American companies start the same way; they just aren't household names. Yet. Séura, one of the few consumer electronics manufacturers still operating in America, traces its roots to the garage of Gretchen and Tim Gilbertson in Green Bay, Wisc.

The couple started tinkering with an idea for a product-and an entire company-after Gretchen had a "light-bulb" moment in 2003. "There was a big trend at that time for moms to create this personal sanctuary within their homes," she says, especially when it came to bathrooms. "They were spending so much money on these spaces that they didn't want to put ugly technology in the room, so this was a really great idea for us to be able to capitalize on that trend." The idea? Hide the ugly television behind a mirror. When it's on, the television picture comes through specially designed glass. When it's off, it's just another mirror in a bathroom. Nice idea in a world where technology and gadgets are invading every part of our daily lives. But neither Gretchen nor Tim was a technologist. Or even knew much about what would go into creating a prototype. In college, they focused a lot on football. Gretchen had been a cheerleader at the University of Wisconsin and Tim was Bucky Badger, the celebrated team mascot. After graduating, Gretchen worked in marketing for Kimberly-Clark, maker of toilet paper among other things. And Tim honed his skills in product development working for a company that made icemakers and wine coolers.

Not knowing much about TV technology didn't stop them, however. The couple sketched their first design in their car coming back from a home showcase where they were doing market research. With just a pad of paper, a pen, and a calculator to figure out sizes and costs, they drafted up what the product should look like. Four months later, they had a prototype made with glass coating they found from a local store, a custom-made metal housing and a television they bought off the shelf. Less than a year after cobbling together the prototype, they hired their first official employee, Air Force veteran Pat Sheahan, and moved their offices from their basement to the garage. A decade later, Sheahan still works at Séura assembling their bathroom mirror televisions. The work he does could have been shipped overseas years ago. It's time-consuming, methodical and detailed. But the company has beat the competition by assembling products in America, allowing them to give customers high quality and fast turnarounds on delivery times. "Pat is an artisan," Gretchen says. "At Séura, we put quality above all else. That means quality of the electronics, the glass, and the technology. In order for these to come together perfectly, our residential units are assembled individually with a lot of care and expertise."

Another 29 people have joined Sheahan and the Gilbertsons at the company's Green Bay headquarters. At 50,000 square feet, it's nearly 100 times the size of the 600-square foot garage they once worked in. There's a sales team and research and development. That's a far cry from when the Gilbertsons were in startup mode. They handled everything themselves, even as they managed to avoid revealing that there were only three people working at the company back then. "The phone would ring and I would pick it up, 'Hello, Séura,' and they'd say 'Can I speak to accounting?'," Gretchen remembers. "And whoever they were looking for on the other end, Tim had to be that person or I had to be that person." But even as the company has grown, the Gilbertsons have stayed in Green Bay, although they now source some of their new products from Asia. The choice to stay in Wisconsin has been a conscious one, even if Green Bay is far away from a big city-or most of their customers. "In the first three to four months of us starting our business, I remember a consultant in the industry who had said, 'You really need to move your business to a major gateway city," Gretchen says. "Obviously we didn't listen to that. There's a lot to offer here."

Staying in their hometown is important to them, particularly because as the company has grown-an average of 65 percent increase in sales each year-they have been able to hire people in a community whose industrial core has all but moved overseas. "The quality and the craftsmanship of what we're able to deliver here in Green Bay, Wisconsin is second to none," Gretchen says. That does mean that Seura's products are more expensive than the televisions you'll find at Costco or Best Buy. They start at about $2,000, but most are built to order, many of them still by Sheahan himself.

In the 1950s, more than 90 television manufacturers operated in the U.S., including storied names such as RCA and Zenith. By the mid-1990s, television manufacturing had literally disappeared, making it impossible for a company like Seura to build its sets with all American-made components. They have to import the display panels and some electronics from Asia, because those things simply aren't made in America anymore. But the Gilbertsons try to find everything else they can to make their televisions within reach of Green Bay, including metals and glass. They do all their product development and their final finishing at the U.S. factory. It's that attention to detail that has given Seura the edge against global competition.

Asian factories typically don't accept small-batch orders, while Séura has much more control over assembly at its headquarters. It can take a customer's own frame and fit a television into it, creating a personalized product out of what has basically become a commodity. Instead of a hulking piece of black glass overpowering a living room, Seura sets are in many ways works of art. Which makes sense considering the company's name is an homage to Georges Séurat, the French impressionist who is credited with creating a technique called pointillism. He painted millions of colored dots to make up a larger image, much like the painting and pixel technology in Séura's televisions. From the bathroom sets, Seura has evolved into building televisions for virtually every room in the house. As people have added more and more technology to their homes, the tech clutter has taken over. Seura's stylish sets offer a streamlined solution. An off-the-shelf set in the bathroom would take up precious counter space. So Seura sets can be mounted on the wall. In a bedroom, a 100-inch flat screen might make some people giddy, but put a custom frame around it and a mirrored glass in front of it and everybody is happy.

Seura paints hard coatings on the glass screen, and customizes it for whatever room it's in. So in the bathroom, it's more reflective so the mirror is usable. In a living room, it's more "transmissive" -- meaning you can see the television better. And then there's the whole great outdoors. Normally televisions and the outdoors don't mix, but Seura may have solved that problem, too. A few years ago, customers began asking the Gilbertsons if they could make an outdoor television. Seura's first television was for the bathroom, so the idea seemed possible. But an outdoor set has to withstand much colder temperatures than a bathroom-and a lot more water than the mist from a shower. So the team developed the Storm, a television that can survive temperatures between minus-30 degrees and up to 140 degrees Fahrenheit. It uses aircraft grade metal to protect the internal circuitry and a cooling system that filters cool air through the bottom of the television. To keep the set weatherproof, the developers took a cue from the automotive industry using sealers like those used in car doors to keep out moisture.

While the Storm was developed in Green Bay, it's produced in Asia to help keep manufacturing costs in check. Most people put the sets, which aren't cheap at between $5,000 and $10,000, in their open-air living rooms, the next big thing in home decorating. But probably the most impressive and for football fans like the Gilbertsons, the most satisfying installation was at Lambeau Field in 2013. For those not familiar with the iconic stadium, Lambeau is home to the Green Bay Packers. Green Bay is the smallest city with a national football team, but it's got one of the biggest and most ardent fan bases in the country. Now it also has 330 Storm screens painted "Packers Green." "In Green Bay they are our "hometown" team in every sense of the word," Tim says. "For any company to be a part of the Lambeau experience is to be a part of what made this community Titletown. It's about team, it's about excellence, and it's about Green Bay." After waiting for years, Tim's name finally came up to be able to buy season tickets for the Packers this year. It's a list many diehard Cheeseheads can be on for decades.

For the Gilbertsons, a family that feels so connected to the city of Green Bay, being able to watch every home game in a stadium housing televisions they developed is particularly gratifying. Not that it's really gone to their heads. As Tim jokingly points out, although he may have scored season tickets, his kids are probably still 84,000 on the waitlist.

Photos and video by Josh Kufahl.

This Built America is a project devoted to the people and companies re-imagining and rebuilding American manufacturing. Every week, Aol will feature their stories, their struggles and their successes as they forge a new path in this country's future.

In this article: seura, television, televisions, thisbuiltamerica, tv, tvs, video
All products recommended by Engadget are selected by our editorial team, independent of our parent company. Some of our stories include affiliate links. If you buy something through one of these links, we may earn an affiliate commission.