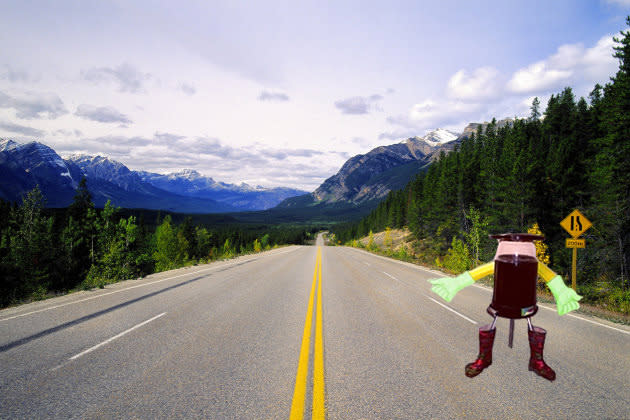 Humans have long wondered whether robots can be trusted, but what about the flip side of that question? Hitchbot, a project developed by researchers from McMaster and Ryerson universities, will examine how strangers interact with a bucket-shaped robot as it bums rides across Canada. With a pair of Wellington boots on its feet and pool noodles for arms, Hitchbot will be hitting the road in Halifax on July 27th.

If someone gives Hitchbot a lift, it will be able to communicate that it's heading to Victoria, British Columbia, thanks to speech recognition and chatbot capabilities. It might even ask to be plugged into a car's cigarette lighter for charging, or pass the time by sharing some of the knowledge it's gleaned from Wikipedia. The robot will be active on social media throughout the journey too, with Facebook and Instagram accounts already up and running.

Spec-wise, the researchers kept their bot pretty simple, with audio, video, GPS and 3G. The bot's torso and hat will also be wrapped in solar panels for charging. What the machine can't do is move on its own -- it will rely on helpful strangers for that. And while the little guy seems pretty darn amusing, there's nothing preventing anyone from dismantling or otherwise harming Hitchbot. As stated in the bot's first journal entry: "My journey's success is reliant on those kind-hearted souls that I'll hopefully meet along the way." Steering clear of moose would be good, too.

In this article: canada, hitchbot, hitchhiking, robot
All products recommended by Engadget are selected by our editorial team, independent of our parent company. Some of our stories include affiliate links. If you buy something through one of these links, we may earn an affiliate commission.