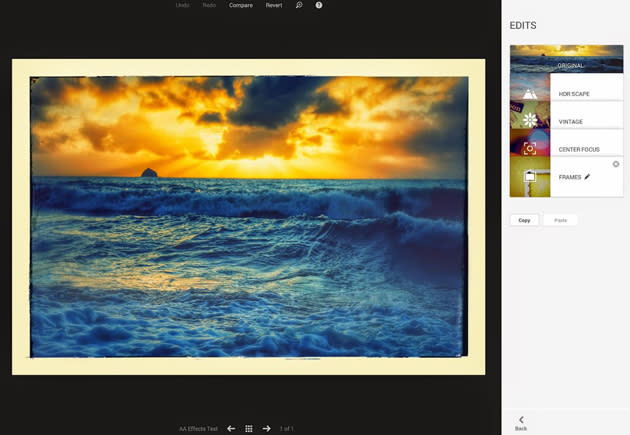 Google+ Photos already saves originals of your edited photos, in case you ever regret some of the more Warholish tweaks you made. Now, Google is letting you go back and edit your edits (editception!), rather than making you start from scratch with the original. So if you like all the filters you previously added, but just wanna crop the shot more tightly, you can do that without having to redo the whole thing. The catch is that this feature only works on Chrome, according to a post from Google employee John Nack, which means Android and iOS users are out of luck for now. Additionally, the company is introducing a feature called Auto Awesome Effects (yep) that automatically applies filters to your photos, videos and GIFs as you upload them. As with everything else, though, these effects are reversible; you can undo them if you don't like the ones Google picked out. Look for both features to start rolling out today, in case you have time for a little image-play.

In this article: google+, Google+Photos, GooglePlus, googleplusphotos, PhotoEditing
All products recommended by Engadget are selected by our editorial team, independent of our parent company. Some of our stories include affiliate links. If you buy something through one of these links, we may earn an affiliate commission.