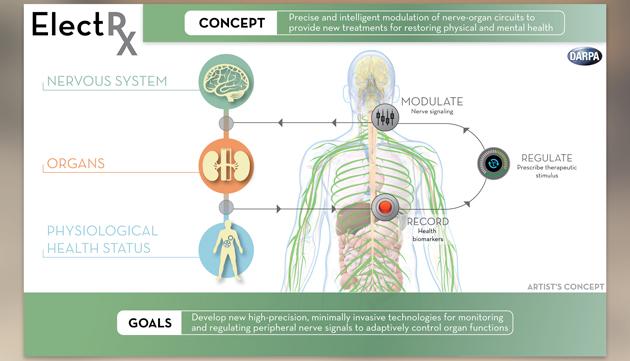 America's mad science division is at it again, this time imagining a future where your body won't need (as much) medicine to stay healthy, simply by using the resources it already has. Put simply, a person's peripheral nervous system runs the internal organs and summons the troops to fight off infections and repair injuries. DARPA's just received $78.9 million of funding to look into harnessing this system to develop a miniscule implant that'd not only make people healthier and less prone to disease, but could also be used to treat mental health complaints like post traumatic stress disorder in the future.

DARPA's plan is to build implants no thicker than a nerve fiber that can then be implanted into people's bodies. Once there, the devices would monitor the status of your nervous system, organs and overall health, keeping the system regulated by triggering responses through electrical impulses. In a way, it's a bit like building a pacemaker for your central nervous system, except one that's capable of helping people live with complaints like arthritis and other inflammatory diseases.

According to neural engineer Dr. Douglas Weber, the eventual goal is to turn the body into a "closed-loop system," that continually assesses itself, ensuring that as soon as any sickness is detected in an organ, the body can quickly deal with it. The upside is that patients won't need to take medicines (which can have adverse side-affects) because they'll rely more upon their super-charged immune systems to deal with problems. Of course, even for DARPA, this is a big ask, since current neuromodulation implants are huge and require complex surgery to install, and we doubt that the technology will shrink to nerve-fiber sizes in just five years. That said, we'll be first in the queue if this ever becomes available - after all, we're fairly sure this is almost the plot of Jake 2.0.

In this article: BRAIN, DARPA, Douglas Weber, ElectRX, Medicine, Mental Health, Neuromodulation, PTSD
All products recommended by Engadget are selected by our editorial team, independent of our parent company. Some of our stories include affiliate links. If you buy something through one of these links, we may earn an affiliate commission.