Aether's Cone speaker is a fresh spin on music streaming 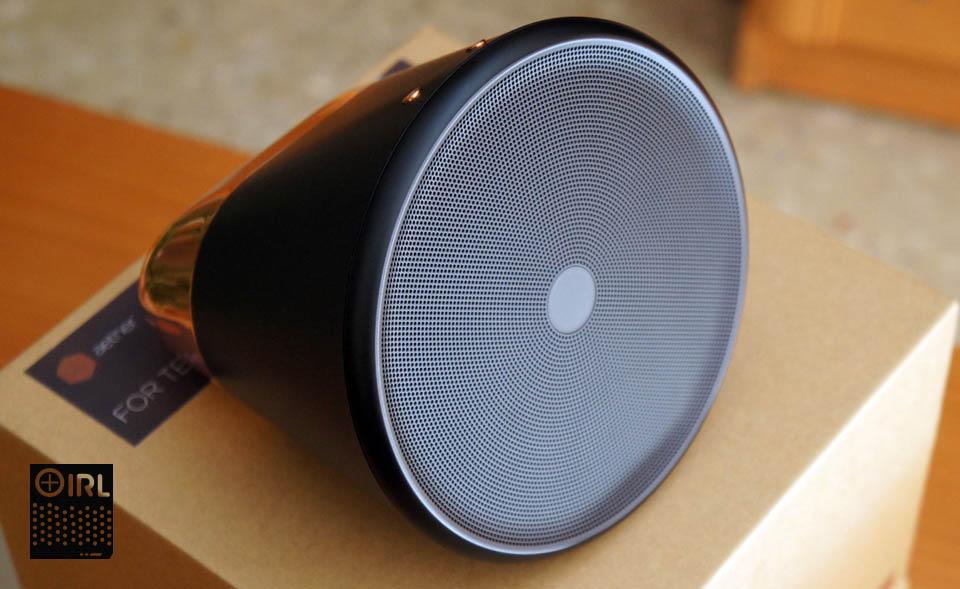 The first HiFi I had all to myself was a hand-me-down Sony music center (something like this). It was a mix of faux-wood panels and brushed metal, with three media options: cassette, vinyl and radio. Then the '90s mainstay "all-in-one" HiFi (and CD!) became my main music hub for many years. These days, it's a very different game. If you're not running a networked system, connected to your favorite streaming services, then, frankly, you're doing it wrong. But, what if you don't want an all-encompassing solution from the likes of Sonos or Bang & Olufsen? You could go with Bluetooth speakers, but that's a whole different proposition altogether (and a bit of a minefield). Then there's the Cone by Aether. It's portable, networked and works with streaming services. At $400 (the same price as Sonos' Play:5 speaker), it's going to have to have a few tricks up it's sleeve to lure in potential buyers. I have a fairly large gap in my music room though -- can this fill it?

At its most basic, Cone is a (nice-looking) portable AirPlay speaker. But that's underselling it somewhat. It also learns what you like to listen to (and when), and it lets you use voice commands to request music directly. You can use an iPhone app to choose songs in a more traditional manner, but that's less exciting. It's also a bit of a lifestyle device. One look at the Cone and its iconic shape and metal-detail finish, and you get the impression this wouldn't be out of place in a Scandinavian interior design catalog.

The user experience is just as manicured. It's simple to set up through an iOS app -- which connects it to your home WiFi and Rdio account (more services are coming). The controls are equally sparse. The front of the speaker is a rotating dial. Press the circle in the center to start playing music. Gently turn it clockwise, and it'll play another song of a similar style. Turn it faster, and it'll play a different genre. On top are metal buttons for volume up and down. You can choose songs directly from the app, as I mentioned, but the party piece is the Siri-esque voice control. Long-press the center button, bark your request and hey, presto, it plays. At least, that's the theory. The problem I usually have with streaming services (before I've even gotten to hardware) is my terrible taste in music. Or rather, just how confused it is. Most music platforms roughly do recommendations like this: "Oh, you like Stevie Wonder? Here's some Diana Ross." The problem is, I must be the only Steve Wonder fan on Earth who also likes Partyraiser, Crystal Castles, Sheep on Drugs, endless Drum & Bass mixes, The Clash, Duke Ellington, Primus, Sonic Youth, Run-D.M.C. and so on. No algorithm has been able to make sense of any of that. With Cone, I was a little more hopeful. It learns from what you tell it, and you can skip tracks you don't like for something totally different, hopefully giving it more direct feedback.

Over the first week, I definitely found myself skipping tracks far more often than having them play through. Then again, I actually discovered some new music I did like, so it wasn't a total loss. After a couple of duff runs (Donny Hathaway can keep his "Flying Easy," and I'm not sold on Loudon Wainwright's "Lullaby" either), it started to play more hits than skips. I coaxed it toward some Motown, starting with "Upside Down" (Yes, I know that's Diana Ross, but it just makes me go all wriggly). From there, I got treated to some Average White Band and Marvin Gaye. But we're back to fairly safe bets. Time to mix it up. I decided to request some very diverse tracks to give it a real feel for how contrasting my tastes can be. "Delusion" by Outblast and Angerfist (that drop at 46 seconds, oh my!). This was followed by Jimi Hendrix's "All Along the Watchtower" (dat solo) among others. This seemed to inject a little vitality into the predictions.

What I learned most is that Cone isn't a fan of Dutch hardcore (along with everyone else I know, to be fair). This point was driven home further when it came time to test out the voice commands. You can apparently ask Cone to "play me such-and-such song by such-and-such artist" or "Play me some Madonna" -- that kind of thing. This actually works fairly well -- if you have mainstream taste in music. Watch the video below where I give it a fairly broad range of music requests and you'll see that, like your mom, it knows the classics. But ask for anything a bit edgier, and it starts to lose the thread. Also, song titles with punctuation (like remixes, collaborations with names in brackets) seem to pose a problem too. I should point out: I checked in advance that every song I was going to ask for was available on Rdio.

What I learned next (or, rather, what I confirmed that I already knew), was that recommending music is a fine art. We might have favorite styles, bands and songs, along with certain listening patterns, but the human condition is such that there's often no rhyme or reason why I suddenly fancy listening to random bits of Public Enemy or (warning, this link immediately starts with colorful language) Top Buzz live at Universe Big Love. An algorithm can sometimes throw up something that matches these flights of fancy, and if it learns you mostly like UK Garage on a Tuesday morning, that's cool too. This isn't a new problem either. Radio DJs are effectively the same thing -- a human algorithm, if you will -- and I've never liked the radio much. I'd prefer to choose my own music. My musical navel-gazing aside, there are, of course, people with logical, coherent tastes in music. There are, I hear, people that like the radio. Or Rdio. For those people, Cone is going to be great. There are many things to like. The fact you can keep a "vibe" going by staying with a musical style is a nice touch. I love that you can just as easily mix things up by giving the wheel a hearty spin. Even the voice requests can be fun. When it gets it right, you feel futuristic; when it gets it wrong, you might discover something entirely new. Then there's the fact that it looks rather nice, and, most importantly sounds good. If it feels strange that I have only given the sound a cursory mention, then that's because I believe Aether isn't solving a HiFi problem here (though it does that too); it's tackling a different one. Cone tries to take the friction out of enjoying music, and it has all the tools to do just that. It's just that I'm a little bit awkward. That said, it occurs to me as I write this, I'm going over some old Hendrix classics I'd not heard in years. All thanks to Cone. So...

In this article: aether, aethercone, audio, cone, engadgetirl, irl, rdio, speaker, streaming
All products recommended by Engadget are selected by our editorial team, independent of our parent company. Some of our stories include affiliate links. If you buy something through one of these links, we may earn an affiliate commission.