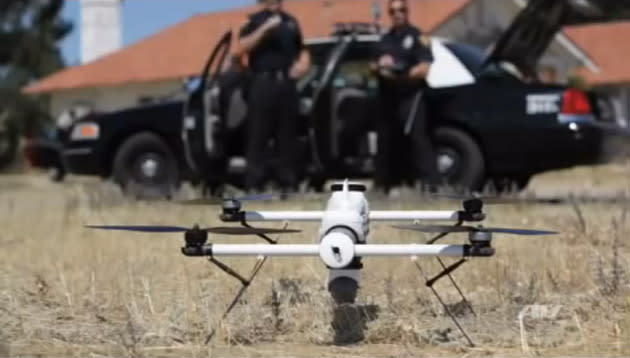 Both the Argentine and the UK police have nabbed bad guys with the help of drones in the past, but what about American cops? Well, the police department in Grand Forks, North Dakota, for one, is putting its drone to good use -- just recently, the city's cops have caught four underage men who've been pulled over for drunk driving using a quadcopter called Qube. The teenagers reportedly ran into a cornfield after being pulled over, but instead of giving chase, the cops flew their trusty Qube to find them amidst rows upon rows of corn.

It took about three minutes to find the first Houdini-wannabe and 25 minutes to find the second one, even if all this went down in the middle of the night -- the two others were caught later on. Grand Forks' police department was apparently the first to secure the FAA's approval to fly drones at night, so the drone-chase was completely legal.

Still, a lot of people fear that the law enforcement, the government and just creepers in general, can use drones to spy on everyone. So Alan Frazier, the Deputy Sheriff in charge of Grand Forks' UAV unit, clarified to Vice that they use their drones "for events that are already occurring," like finding felony suspects, and that there are no plans to use them for covert operations. When asked whether he thinks cops should have a warrant before they can unleash drones on suspects, though, Frazier says "absolutely not" unless the suspect has a "reasonable expectation of privacy." (Presumably, that means they can't fly drones to spy on suspects in their own homes without a warrant.)

Qube, by the way, is a small quadcopter developed by AeroVironment that's being used by several police departments across the US. The company makes many other drones, as well, including the Puma (the first UAV to get the FAA's approval to fly commercially) and a robotic hummingbird, which it developed for DARPA.

In this article: COPS, drone, drones, LawEnforcement, police, qube
All products recommended by Engadget are selected by our editorial team, independent of our parent company. Some of our stories include affiliate links. If you buy something through one of these links, we may earn an affiliate commission.