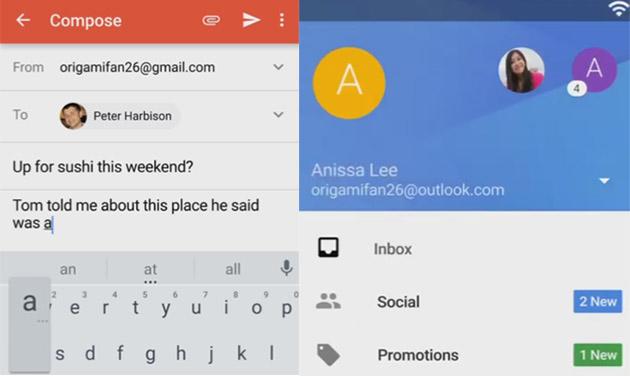 A leaked video spotted by Android Police appears to show sweeping changes for Gmail 5.0 on Android, including integration with Yahoo, Microsoft and other email services. We say "appears," because the strangely formatted video came from an anonymous user on a little-known upload site. Still, it looks like a genuine preview of the app, and at least one of the users in the video is an actual Google marketing employee. That out of the way, what does it show? The juiciest new feature is third-party email integration, with support for Yahoo, Hotmail and others just a swipe away. Gmail has always supported POP3 accounts, but the new feature would let many users dump their other email apps. Otherwise, we see a wholesale design change to Android 5's Material look, with new icons, colors and more. Check the video below or the source, but in this case we'd advise a pinch of skepticism -- sometimes these things don't pan out.

Update: The Material Design leaks just won't stop -- Droid-Life has images of the revamped Google Play Music app, culled straight from a Nexus 4 ROM; though we're not 100 percent sure that this is the real deal. With the Nexus 6 and Nexus 9 scheduled to touch down in early November, it won't be long until we get a much fuller sense of Google's new design chops.

In this article: android, Android5.0, androidl, Gmail, Gmail5, google, Lollipop, video
All products recommended by Engadget are selected by our editorial team, independent of our parent company. Some of our stories include affiliate links. If you buy something through one of these links, we may earn an affiliate commission.