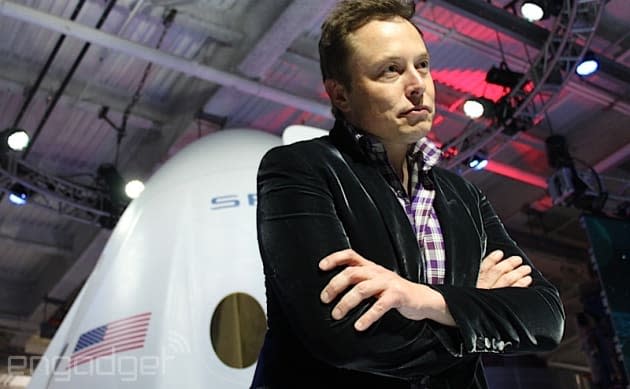 Small, low-cost internet satellites that provide affordable internet to everyone on the planet. These are what Elon Musk wants to create next after working on reusable rockets, space capsules and electric cars since the early 2000's, according to The Wall Street Journal. The publication says Musk is in the early stages of collaborating with Greg Wyler, who founded O3b Networks and led Google's internet satellite venture until earlier this year. The duo (with Wyler now representing WorldVu, a company he also founded recently) apparently plans to launch a total of 700 internet satellites into space. They want each of those satellites to cost less than $1 million to build and to weigh less than 250 pounds -- a huge undertaking, seeing as the smallest models these days cost several millions and weigh at least 500 pounds.

Wyler reportedly brought the idea to Google first during his time with the company, but he ended up leaving with his plans in tow, as he wasn't entirely sure Mountain View had "sufficient manufacturing expertise." Perhaps he thought things would fare better with the man behind Tesla and SpaceX, that's why he, along with Musk, have already talked to Florida and Colorado government officials about the possibility of building factories in those states. Still, they're in the very early stages of planning, and Musk might even drop out of the picture, since nothing's official just yet. If the two do decide to go through with their joint project, they'll first have to face a lot of regulatory hurdles and raise $1 billion to spend for the development process, among other issues. But hey, if this report is true, at least they don't have to worry about which rockets to use to launch the satellites to space anymore.

In this article: ElonMusk, Internet, InternetSatellite, satellite, space, SpaceX
All products recommended by Engadget are selected by our editorial team, independent of our parent company. Some of our stories include affiliate links. If you buy something through one of these links, we may earn an affiliate commission.