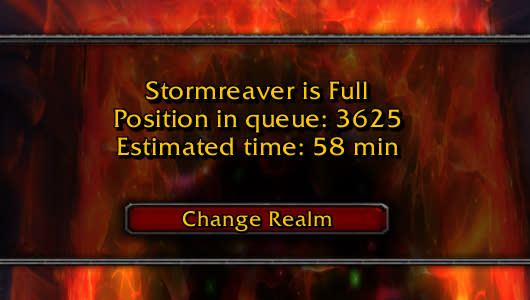 Massively's Mike Foster started his MMO career with World of Warcraft, cruising the hills of Stranglethorn on a completely incompetent priest. Later he became a Mage, Death Knight, a Rogue, a Shaman, and... everything but Paladin, basically. Thus, it's only fitting that he dive immediately into Warlords of Draenor, WoW's most recent expansion, to see what's new. Tune in tonight to watch Mike as he investigates some Warlords of Draenor content and attempts to re-learn his PvP-centric hotkeys.

The action starts at 7:00 p.m. EST, as long as the queue gods treat him right.

In this article: activision, blizzard, blizzard-entertainment, fantasy, hands-on, launch, launch-day, launches, livestream, livestreaming, livestreams, massively-meta, massively-tv, mv-tv, mvtv, stream, stream-team, streaming, streamteam, the-stream-team, twitch, twitch-tv, video, videos, warcraft, warlords-of-draenor, world-of-warcraft, wow
All products recommended by Engadget are selected by our editorial team, independent of our parent company. Some of our stories include affiliate links. If you buy something through one of these links, we may earn an affiliate commission.